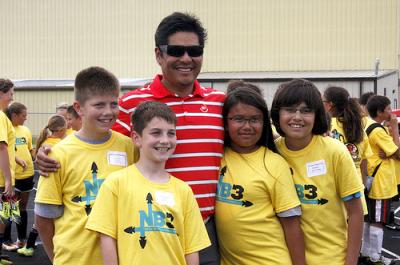 Famed Native professional golfer Notah Begay III had to work hard for his success. His message of hard work, respecting one’s Native culture, living a healthy lifestyle, is something he wanted to share with Native youth and on May 29 he did just that.

More than 150 Native youth made up of Osages, Pawnees and other surrounding tribes attended a soccer clinic hosted by the Notah Begay III (NB3) Foundation at the Pawhuska High School football field, which also acts as the high school’s soccer field.

Begay, Navajo/San Felipe Pueblo/Isleta Pueblo, is the only full-blooded Native American professional golfer on the PGA Tour. He is a four-time PGA tour winner and is currently a commentator on the Golf Channel, and this year he covered the Masters.

He is good friends with Tiger Woods, graduated from Stanford University with a degree in economics, and lives with his family in Dallas. With his impressive life, he told the kids that he hasn’t always had it easy. He’s had his ups and downs and he told the kids they can overcome their surroundings by making good choices.

“I know that crystal meth is becoming more prevalent in our communities now, and I’m here to tell you – that’s not the way, that’s not our path,” Begay said. “It might seem cool, your friends might be doing it. Those things will lead you down the wrong path and before you know it, your life is spinning out of control, without any hope of getting it back in the right direction. We have a choice to be healthy and positive, and drug use and alcohol use is not a part of that.”

NB3, a successful non-profit foundation Begay founded in 2005, is a means to use sports and wellness for social change, and to fight the epidemic of type 2 diabetes in Native communities, according to the NB3 website. Based at the Santa Ana Pueblo in New Mexico, the NB3 Foundation operates soccer, golf, health and youth leadership programming at San Felipe Pueblo, in the greater Albuquerque area and other tribal communities in New Mexico, including the Navajo Nation community of To’hajiilee.

The soccer clinic began at 8 a.m. and ended around 3 p.m. The clinic was free, each child got a NB3 soccer t-shirt and an autographed soccer ball by Begay. The clinic is for Native youth, ages 5 to 12 years old. NB3 soccer instructors teach the basics of soccer and good nutrition. Also participating were Osage Nation employees from the Health and Wellness Division and the Cultural Division. They set up educational and cultural education stations for the children to teach Tai Chi, eating healthy, the Osage language and other fun activities.

“If you look at the design (for NB3), you see the four arrows pointing in the four directions, that was important to me because the four directions are a big part of who we are as Indian people and that’s where a lot of our strength comes from, the spirituality standpoint is the four directions,” Begay said. “That’s always been something for me to use as a guide because I’ve traveled all around the world and my grandmother and mother always taught me that our traditions and heritage is never far away if we just look around the corner to the oceans and the mountains and all the things that have been here long before us, and will probably be here long after we’re gone.

“The things that we focus on at NB3 are an integral part of who I am as a person. You’re probably wondering why I’m holding up a golf club when you see a lot of soccer balls out here, right? Well, this golf club is a primary reason why I am standing before you today.”

Begay got his first lesson in golf after his father, searching for an “easy” sport other than basketball, took Begay to the local golf course and gave him a club. From then on Begay was hooked.

“I found something that I really enjoyed, I found something that inspired me to want to work and practice. So when I was not 9 years old, I went to the local golf course and asked the head guy for a job and I told him he didn’t have to pay me any money, he just had to let me practice. So I would show up at 5:30 every morning … I would sweep, clean bathrooms, pick up trash, do all the little things to keep the golf course kind of going and then at 7:30 they’d let me off.

“It became my way to have access to golf and by the time I was 17 years old I was the number one junior golfer in the United States.”

He played on public golf courses, his family usually found cheap equipment at yard sales, and for a short time he wore women’s golf shoes, but no one could tell the difference, he said.

“It didn’t matter what kind of equipment I had. I was the only Indian in golf and that was hard at times because I always felt like I was alone on the golf course,” he said. “I was around a lot of wealthy kids that played at country clubs and had a lot of money. They’d stay at nice hotels and I slept on people’s couches.”

But it was his dedication that won him a full-ride golf scholarship to Stanford University. While there, he famously roomed with Tiger Woods and became good friends with an Osage attending Stanford Law at the time, Wilson Pipestem.

Since that time he and Pipestem have worked on many projects together. Pipestem sits on the NB3 board of directors as well as Dr. Moira Red Corn, Osage.

“I went there (Stanford University), it took me five years, but I graduated. I was a three-time All American, won a National Championship, and I became good friends with Tiger Woods. We’ve maintained our friendship, he’s done a lot for golf,” Begay said. “It’s fun to watch him do well and win again, because he went through a tough time, as a lot of us do in our lives, and now he seems to be working through those things.”

Begay understands because he also went through a tough time, which he explained to the kids was a wake-up call to make good choices in life.

“I spent a week in jail for drunk driving when I was 27. That’s part of my story, and people ask me, would you go back and change it and I say no. It was something I look back on and I learned from,” he said. “The tough part of that was, I felt so bad because I made such a bad decision. It impacted my family, it impacted my friends, it impacted a lot of things in my life – I put my career at risk, I put a lot of things I had worked so hard for at risk.”

The soccer clinic in Pawhuska on May 29 was one of the most well attended soccer clinics the NB3 Foundation has hosted in Indian Country, said Anthony Shackelford, ON Prevention director.

“It was a roaring success,” Shackelford said. “From my conversations with Notah (Begay) afterward, he said it was probably one of the, if not the, best attended camps they’ve put on.”

For five years the NB3 has hosted a charity golf tournament and Tiger Woods will join Begay on August 28 to raise money at the sixth annual Notah Begay III Foundation Challenge at Atunyote Golf Club in Verona, New York. The course was named a 2012 Top 40 Best Casino Course by Golfweek.

Tickets to the 2013 NB3 Challenge are on sale now for $50 and can be purchased by contacting the Turning Stone Box Office at 315-361-SHOW.

According to Indian Country Today, the foundations partnership with Johns Hopkins University has allowed NB3 to improve its programming and make it more effective for the Native youth. Johns Hopkins Center for American Indian Health conducted a two-year study evaluating the impact of NB3 soccer programs at San Felipe Pueblo in New Mexico and found the programs have a significant impact on the physical fitness of Native American children.

For more information about the NB3 Foundation visit its website at www.nb3foundation.org. To view more photos from the soccer clinic, visit the Osage News Flickr page at www.flickr.com/photos/osagenews/.