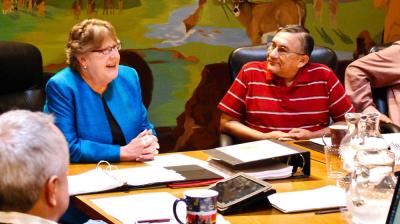 The Osage Nation Congressional subpoena debate over the Rod Hartness consulting contract approved by Principal Chief John Red Eagle continues, with Treasurer Callie Catcher filing a May 31 tribal court motion for a protective order to prevent the Congress from taking her oral deposition in a scheduled June 6 meeting.

The Congress is demanding any consulting contracts Hartness may have had with the Nation for the past 12 months after the Congressional commerce and economic development committee voted to subpoena the contracts from Catcher during a March 13 meeting. Prior efforts to obtain information about any Hartness contracts failed after the Executive Branch did not honor a request made during a January commerce committee meeting for Hartness’s contract and resume leading to the subpoena approval by a committee vote in March.

Now Catcher is challenging both the subpoena and deposition notice by requesting the protective order excusing her from the June 6 event after she was served with the written deposition meeting notice dated May 16.

In her May 31 order filed in ON Trial Court, Catcher argues she still has a pending motion before the court after her attorney, Kirke Kickingbird, filed a motion to quash the Congressional subpoena for the Hartness contract(s) in April.

No ruling has been made yet on the quash motion, so Catcher contends, “there is a pending dispositive motion before the court which must be decided before any discovery can proceed,” according to the protective order motion request. Catcher is asking the court to issue the protective order that “forbids any disclosure or discovery until this Court resolves the dispositive issue raised by Petitioner’s Motion to Quash challenging the validity of the improper subpoena dated April 8.”

Catcher filed the April 8 quash subpoena motion request citing reasons which include concerns that providing contracts between the Nation and Hartness, “requires disclosure of privileged and protected matter, as it makes no exception for communications with the Principal Chief or Assistant Principal Chief, which communications are protected by Executive Privilege.”

Catcher’s filed brief in support for the protective order motion mentions the April 8 quash motion was issued after a prior Congressional subpoena issued March 13 was formally withdrawn by Congressional Speaker Raymond Red Corn, through Congressional attorney Loyed “Trey” Gill, after that subpoena was served to Catcher without the signature page containing authorizing signatures from Red Corn and Congresswoman Shannon Edwards, who was chairperson of the Congressional commerce committee when the subpoena vote was issued.

Catcher cited the Nation’s subpoena law in her brief submitted by Kickingbird noting the March subpoena was faulty and incomplete for having no authorized signatures. In response, Red Corn issued a second subpoena dated April 8 for the Hartness contracts, which Catcher is also challenging.

Catcher contends the second Congressional subpoena was issued “without the vote of the Commerce Committee” as required by Osage law.

On June 3, Gill filed a response in opposition to Catcher’s protective order motion on behalf of Red Corn. In response, Red Corn argues that Catcher’s motion “is intended to thwart, or in the alternative, delay the discovery process in order to keep contracts between the Osage Nation and Rod Hartness hidden from the public eye even though they are designated ‘public record’ by the Osage Nation Open Records Act.”

In response, Red Corn argues that Catcher’s protective order motion “fails to allege the Petitioner will be subject to annoyance, embarrassment, oppression or undue burden or expense as a result of the deposition by oral examination as set forth (in Federal Rules of Civil Procedure).” Red Corn also argues Catcher has not produced evidence to support claims that the subpoena creates an undue hardship upon her and that the subpoena serves no legislative purpose.

According to the Trial Court, Red Corn’s response was the last court document item filed in the case when the June issue of the Osage News went to print. June 6 also occurred during press and mailing delivery time of the newspaper. See the July edition of the newspaper and osagenews.org Web site for updates on the case when available.