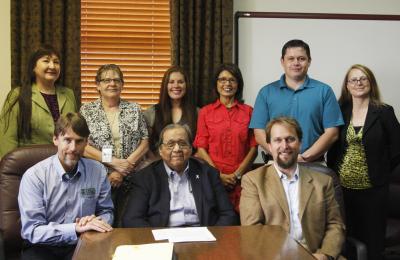 “This is an important study which will help establish water conservation and responsible water planning in the Osage,” Red Eagle said.

The result will be “an integrated surface-water/groundwater model, which is three dimensional and will be created using a numerical simulation process to analyze changes in flow, storage and recharge in the different hydrologic regions of the Osage with different climate and water-use scenarios. [This] model will be used to estimate available volumes of fresh and saline water resources,” Mott said.

The Third Osage Nation Congress unanimously passed ONCA 13-14 (Standing Bear) to appropriate $1,862,600 to the Osage Nation Environmental and Natural Resources Department for the water study. ENR will use $600,000 to directly fund a separate contract for geophysical surveys, according to a prepared release.

The USGS has agreed to contribute $194,000 to the study. Over four years $2,191,900 will be needed to complete the USGS portion of the study, with the remaining $929,300 in needed funds to be appropriated by the ON Congress in subsequent fiscal years, according to the release.

“About one-third of those could be existing wells, with the other two-thirds of the wells to be drilled for the study,” Harich said. “The hope is that residents will volunteer to have existing wells sampled or new wells installed on their properties for the study.”

During the month of July and August, the USGS will be holding several meetings in communities throughout Osage County in order to prepare residents for what is to come and to seek volunteers to participate in well monitoring on their properties, according to the release.

As part of the information gathering process, a helicopter equipped with cable lines holding electromagnetic and magnetic instruments will fly over Osage County.

According to Mott, the aerial survey of the county will be flown in a grid pattern across the county by both aircraft at different times. “East-west lines will be flown one-quarter mile apart at elevations from 100-500 feet above the ground, and two and one-half miles apart in a north-south direction. All survey flights will occur during daylight hours and be approved by the FAA in advance.”

The USGS will work with the Osage Nation’s ENR department.

Mott encouraged residents to watch in local newspapers for announcements of the dates and locations of upcoming meetings.

For more information visit USGS.gov, and follow them on Twitter@USGS and other social media channels.