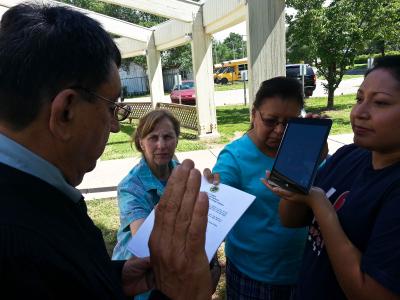 ON Editorial Board member sworn in via Skype

Osage Nation Editorial Board member Teresa Trumbly Lamsam took her oath of office on June 27 from her home in Nebraska, thanks to Internet technology.

Lamsam appeared in front of ON Trial Court Judge Marvin Stepson via Skype the day of her office swearing-in. Lamsam lives in Omaha where she teaches at the University of Nebraska-Omaha.

The event marked a first for the Nation where a board member was sworn in via Skype, the video teleconferencing tool used worldwide for business or personal use, and via iPad, using Wi-Fi Hotspot from Osage News Editor Shannon Shaw Duty’s Smartphone. The swearing-in took place outside the courthouse for better reception. The ON courthouse does not have Wi-Fi.

In Osage Nation government, board and commission members, their business guests and Congress members use Skype to attend meetings when needed.

Due to work and medical reasons, Lamsam could not plan a Pawhuska trip for her swearing-in, but she was confirmed by the Third ON Congress in this year’s Hun-Kah Session to serve on the board. Lamsam and board members Jerri Jean Branstetter and Lu King were all confirmed by Congressional votes during the Hun-Kah Session.

Lamsam (Osage) is an associate professor at the University of Nebraska-Omaha in the School of Communications where her research interests include Native American journalism. She is also a former Osage Nation News editor and co-founded Wellbound Storytellers, a blog for Native peoples to share their journeys to wellness.