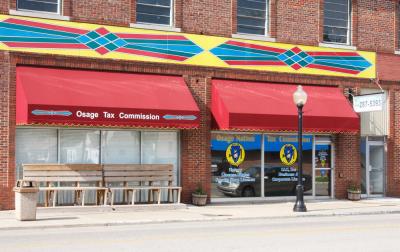 The Osage Nation Tax Commission and Principal Chief John Red Eagle are closer to finalizing a draft of the Nation’s Tobacco Compact with the state.

The deadline for negotiations was June 30 but since the Nation is in “good-faith negotiations” with Oklahoma Governor Mary Fallin, she is granting a short-term tobacco agreement until negotiations are finalized.

In an April 4 letter to the United Indian Nations of Oklahoma, Kansas and Texas, the group spearheading tobacco compact negotiations with the state and tribes, Fallin said, “I am willing to enter into short-term tobacco agreements to allow time to finish negotiations and insure that there are no significant disruption of tribal or state services as a result of the expiration of current compacts.”

At a June 11 Osage Tax Commission meeting at the Wah-Zha-Zhi Cultural Center, Mary Mashunkashey, Osage Tax Administrator, invited Osage retailers and vendors to provide input on the negotiation process, since this was the first time the Tax Commission has been involved, she said.

“Something all the tribe’s wanted was the Most Favored Nation’s Clause. If you’re new to the tobacco business, if one of the tribes has signed a compact before you, then your tribe comes up and they get something that’s not as good as a previous tribe, they can go back and get whatever one of the other tribes has had,” Mashunkashey said. “The way it’s been written now, the Creek and Kaw (Nations), and probably the Cheyenne and Arapaho (Tribes), they do not have the Most Favored Nation’s Clause, they’ve taken it out. That was one of the things the governor did not want in there.”

Currently, 38 federally recognized tribes in Oklahoma have tobacco compacts with the state and only four have completed their compacts at the time this issue of the Osage News went to press. The Muscogee-Creek Nation, Kaw Nation, Cheyenne and Arapaho Tribes and the Fort Sill Apaches have signed compacts and those went into effect July 1. All four compacts do not have Most Favored Nations Clause or border rates but include burn bans. The burn bans do not extend to religious or ceremonial activities.

Mashunkashey told Osage retailers at the June 11 meeting that there has been mention of going back to the rebate system, something she does not want to see. Fallin also wants to shorten the compacts to every four years and increase the percentage the state receives from tribes.

“Most of you know the Kaws (Kaw Nation) compact, it starts out at a 25 to 75 percent ratio, then it goes 30/70, then it goes 35/65. It’s a four-year compact. That fourth year it gets 50/50. When you look at it, you can see that’s probably where the governor wants to take everything. We all knew this was coming. The Creek (Nation) compact, it doesn’t do that, it was just 25/75, it never progressed,” Mashunkashey said. “PJ Mayes (Osage retailer) was at one of the tribal leader meetings (UINOKT). They (tribal leaders) did not want four-year compacts, they felt four years was too short of a time to have a compact. When you have a four-year compact the tribes are going to have to negotiate with every single governor that comes in … they weren’t real excited about that, we’ve always worked under a 10-year compact.”

Mayes was in attendance at the June 11 meeting and said he was not in favor of the rebate system or a four-year compact.

“My question is, and this goes on to history with doing business and negotiating with the state, when we had our old compact, our tribe, was getting rebated money and you (Mashunkashey) more than anybody knows how inefficient the state is at rebating money,” Mayes said.  “That is my big main concern, my other concern is, it’s easy to negotiate compacts with a tribe that owns its own stores. We’re independent and I have this feeling this compact was signed intentionally with a tribe that owns its own stores to get the camels nose under the tent, and I believe with my heart this new compact is aimed at independent stores.”

Mayes is the owner of three smoke shops called Osage Trading Co. in Pawhuska, Skiatook and Ponca City. Unlike the tribes who have already signed compacts, the Osage Nation has smoke shops that are owned by individual Osages and aren’t just tribally owned. Mayes said that it takes at least two years to get his customers back after the tribe negotiates a new compact. Tax rates change, changing prices of his cigarettes and the customers become unhappy and go to someone else.

Mashunkashey, who has been with the ON Tax Commission since before the new 2006 government, said she has really seen the business change over the years and remembers when the tribes only paid the state 25 percent. She also remembers the unsuccessful rebate system.

“We did go through probably only 5-6 years actually in that old compact when we did have a rebate system. During that rebate system … they (the state) were supposed to collect the taxes from the wholesalers. They (the state) paid it, then they were supposed to rebate it back to us quarterly,” Mashunkashey said. “In which we never got money quarterly, we would get maybe a random 4-5 months, and then we got a check from the Oklahoma Tax Commission for the dollar amount. We had no idea how much money they were paying … we just got this check and put it in our bank account and hoped for the best.”

Mashunkashey said she hopes the state and tribe can come to an agreement that benefits everyone and looks forward to getting the compact signed.