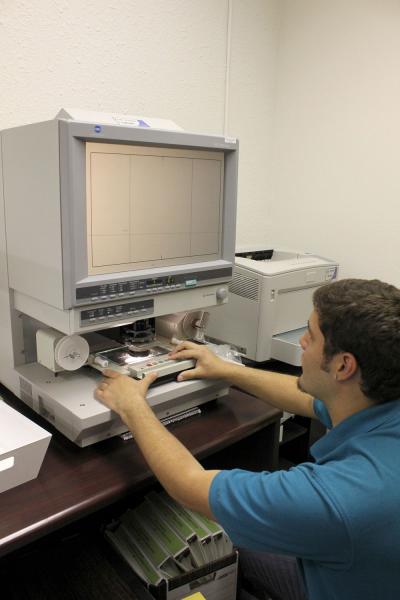 The Osage Nation Archives Department is making it possible for documents to be viewed 500 years from now.

The department is using a microfilm machine to scan and preserve ON documents.

“Through trainings we attended they emphasized to go back to microfilming since it lasts,” said Mary Brown, ON Archives Department director.

In August 2010, the department had money appropriated to purchase the microfilm machine.

“When we did some researching we only found two vendors that provided the machine and they were shocked when we told them we wanted to purchase one,” Brown said.

“Microfilming is obsolete but starting to come back in archive departments and we were told we are the only tribe in Oklahoma to use a microfilm machine,” she added.

Prior to their purchase, the ON Archive Department didn’t have an archiving method.

“The archive department was developed in 2006 and staff did inventory in different Osage Nation departments,” Brown said. “In this process the staff started looking for a way to preserve documents and microfilming was the best way.”

The department also began digitizing documents using iSynergy Software, but put it on hold due to glitches with the software, said Trevor Piearcy, Archivist and Records Management Specialist for the ON Archive Department.

“Technology changes so quickly and can be unreliable at times,” said Piearcy. “With the microfilm machine you don’t have to worry about issues like that.”

“If technology ever failed all you need is sunlight or good light and a magnifying glass to see the film,” Brown added.

The ON Archive Department uses 16-millimeter reels, which can hold up to 2,500 scanned images.

“Paper records and small maps are what we microfilm,” Brown said. “Thirty-two by thirty-two is the biggest size we can microfilm, anything bigger we send it off.”

The reels are sent to Tulsa Optimum Service Inc. to be processed. The processing takes between 24 to 48 hours, said Piearcy.

There are three copies made; the original that is never touched, a working copy and one that is shipped off-site to the Oklahoma History Centerin Oklahoma City.

“We send a copy off site just in case a disaster was to occur,” Brown said. “Also, the original reels are stored in a fire-proof safe at the archives department.”

Brown and Piearcy admit it hasn’t been easy learning how to microfilm.

“We’ve had a lot of trial and error,” Piearcy said. “For example if the film is exposed in anyway it is ruined and you have to start all over again.”

The staff also has to make sure the documents don’t have any pencil marks or staples.

“It’s a timely process but it is worth it in the long run,” Brown said. “It is good to know that down the road, long after we are gone, documents will still be here safely stored.”

Piearcy tries to microfilm once a week but hopes the department can do it more often since they are fully staffed.

“I am so proud of Mary and her staff,” said Joe Tillman, ON Department of Education division leader. “She has stepped in and filled a big pair of shoes and has kept the program going in the right direction.”

In the future, Brown would like to have a full-time employee who only microfilms and digitizes. As well as, be able to process their own film to save money.

“Mary’s work ethic and knowledge of the Archives program is impressive and we look forward to the future with very high hopes,” Tillman said.