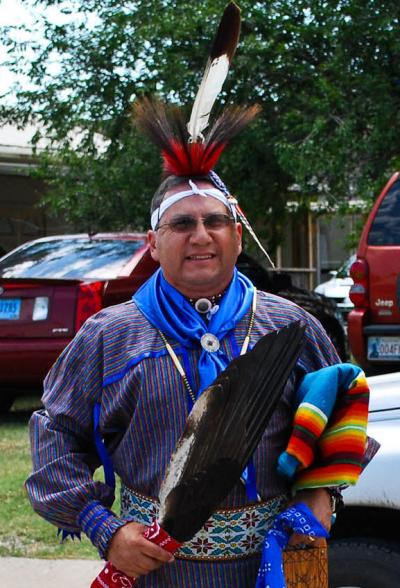 The Second Osage Minerals Council elected Andrew Yates as its chairman in May.

Yates is the fifth council member to hold the office of OMC chairman since the 2006 new government. The first was Jewell Purcell, who served as chair from 2006-2008, John Henry Mashunkashey, was the second, serving from 2008-2010. The Second Osage Minerals Council was elected in 2010 and elected Dudley Whitehorn as the third chairman, serving as chairman from 2010-2012. Councilman Galen Crum replace Whitehorn as chairman from 2012-2013 and now Yates has been elected to serve.

Yates said it came as a complete surprise because he didn’t really campaign for the position or ask his colleagues to nominate him. Yates was up against former chairman Whitehorn.

“We had talked about it and it kind of happened at the last minute,” Yates said. Asked whether or not he thought he would win after nominated, he said, “I didn’t really think I’d get it, no I didn’t.”

“All I’m going to do is … I’ve went to a lot of meetings lately and I’m going to become a facilitator, make sure they’re always handled properly. And just handle the meetings, conduct the meetings, anyone who wants to be on the agenda is put on there on the proper places, allowed to speak,” he said.

Yates is the great-grandson of Henry and Hope Coshehe, grandson of John and Josephine Coshehe and the son of Paul and Eva Mae Coshehe Yates. He is of the Beaver Band and the Sun Carrier clan from the Wa-Xa-Ko-Li District. His family participates in the June dances each year and he has served on past In-Lo’n-Shka committees.

He graduated from St. Gregorys College in Shawnee, Okla., and attended the University of Oklahoma. He currently owns and operates a small ranch south of Pawhuska on restricted Indian property, with his wife of 12 years, Shelly and his two young daughters Annabelle Eva and Josephine Mae Yates. His oldest daughter Jennifer Kathleen Yates attends college in Stillwater, Okla.

He is an Osage Mineral shareholder and serves on the Evergreen Rural Water Board District #18. He also has gas mineral interests outside of Osage County.

For more than 25 years, he has worked in the Osage Nation Environmental and Natural Resources Department’s Underground Injection Control (UIC) Program. His job is to oversee oil and gas industry Class II saltwater injection wells on the Osage Reservation. He said he has worked closely with the Bureau of Indian Affairs and the U. S. Environmental Protection Agency during his time with the UIC program.