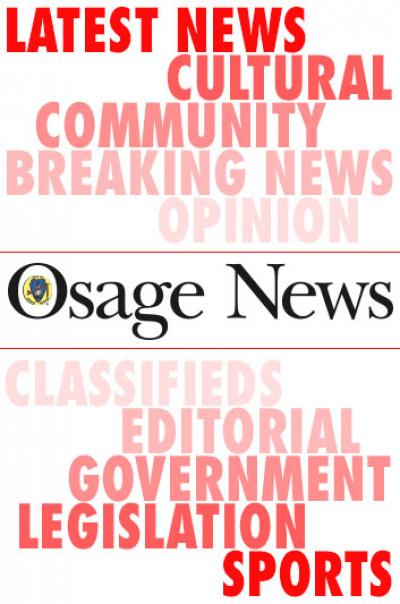 The Osage Nation Gaming Enterprise and Osage Casino officials describe 2012 as one of its best fiscal years ever and predict 2013 will be even better, with new Ponca City and Skiatook casinos scheduled to open in December.

Opening day activities are being planned as the casino officials and construction crews continue building the hotel/casino properties. In the meantime the Nation’s gaming officials said more expansion projects are underway with consideration and operational improvements at the gaming board and casino management levels.

In a news release highlighting Osage’s Casino’s 2012 fiscal year, the seven-casino venture said it received four consecutive years of “unqualified” financial audits from outside firms, which is the highest rating an audited entity can receive.

The announcement of 2012’s unqualified audit as No. 4 for the Osage Casino operations comes after the gaming entity underwent changes including an increase of Gaming Enterprise Board members from three to five and Osage Casino management and the board starting new and improved projects for its Osage Casino properties – previously called Osage Million Dollar Elm Casino.

“2012 was a superior year with many highlights, however 2013 is going to be over the top,” Osage Casino CEO Neil Cornelius said in a news release listing highlights of the year.

For example, Cornelius said during a March 12 gaming board meeting Osage Casino revenue increased by 9.2 percent in FY2012 compared to 2011. Cornelius also said casino operation expenses decreased by 2 percent and the gaming enterprise distributed a total of $38 million to the Osage Nation for governmental operations.

“Everything’s in good shape, we’re positioned very well, we’re strong, our operations are strong and the future is bright,” Cornelius said during the meeting. “And there’s no magic to it, it takes teamwork.”

Regarding the gaming audit reports, gaming board chairwoman Stacy Laskey said, “I am extremely proud of the work being performed at all levels within our organization. From top to bottom, the (casino) executive team is simultaneously driving home the importance of regulatory compliance and guest experience.”

In his fourth year as casino CEO, Cornelius said, “Our assets are safe, the integrity of the operations is intact. We’ve gone from 2008 when we couldn’t do an audit to having four straight non-qualified audits.”

Bryan Gansen, assurance director for McGladrey, presented an audit report during the March board meeting and said the unqualified opinion rating indicates the casino is following all accounting rules appropriately and the financial reports are an accurate representation of the casino’s financial status.

“This is the report card of management,” Gansen said. “If me and my team come in and I show you 20 audit adjustments here that means that stuff you weren’t looking at on a monthly basis just wasn’t all that right.” Gansen also added no significant findings were discovered, which could occur whenever an entity switches auditing firms with the newest one having different auditing styles.

- The casino owns 52 percent of its gaming machines, decreasing costs on leasing machines.

- Osage Casino’s human resources department publicized 720 positions with 374 hired and 30 Osages among those hired in 2012.

- Osages make up 12 percent of the Osage Casino workforce, which Cornelius said continues to be a continuous focus area for casino management.

- The gaming board held its first ever Congressional orientation with the Third ON Congress in July 2012 to share and communicate information with the newly elected Congress members to give them an understanding of how the enterprise operates, Laskey said.

- Cornelius said the casino’s partnership with the WNBA Tulsa Shock remains the only one where the WNBA and a tribally-owned entity have a marquee sponsorship. The Shock played their first game wearing the Osage Casino/Shock jersey in May.

Cornelius also said the Nation owns 300 acres of land in the Tulsa area and studies are underway to help determine the best use for developing on it noting, that means we have room for a complex and resort … We are working on the future.”