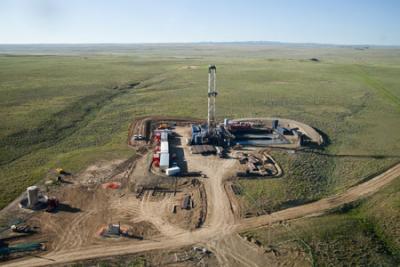 Horizontal wells too costly for two companies in Osage County

Two of the Nation’s biggest oil producers are shutting down their horizontal well operations in Osage County due to poor returns on the expensive wells.

Canadian-based Encana Corp., and Oklahoma City-based Chaparral Energy LLC, are leaving their Mississippi shale drilling operations and returning to vertical drilling in Osage County. Both companies told The Journal Record that due to new regulations and poor returns on the expensive wells, it wasn’t economically feasible to continue. Horizontal wells can cost up to $2.8 million each and are projected to produce 70,000 to 80,000 barrels. Chaparral was already seven wells into a 25-well horizontal drilling operation.

“(Encana) recently asked for and was granted permission by the Minerals Council to market their position in the Osage to other producers. They stated that the area they were developing showed strong potential but hadn’t preformed as well as other areas to which they could divert their resources,” Yates said. “(Chaparral) also related that their exploration area showed potential, particularly for vertical wells. However, they felt the uneven results of the horizontal wells they had completed didn’t justify drilling the number of horizontal wells needed this year to comply with their agreement. Thus they were opting out of the remainder of their horizontal exploration agreement in favor of returning for the time being to vertical well drilling. But they are remaining strong in the Osage.”

Two years ago the OMC began to enter into exclusive exploration and leasing agreements with oil companies, enticing them to experiment in developing horizontal drilling wells into the Mississippi formation under Osage County.

“Ultimately, we entered into agreements with six different companies and we committed about 400,000 acres for their use in this project. The agreements called for aggressive yearly drilling commitments and were to last for only 3-4 years with any unused land released back to the Osage for re-marketing,” he said in a prepared statement.

Yates said mixed results were expected, with some operations doing well and others not so well, but overall the horizontal drilling operations have been very successful. He said the council has collected tens of millions of dollars in exploration and lease bonuses and has added “a couple of thousand barrels a day in new oil production as well as significant increases in gas production.”

“This week they (Chaparral) asked for and were granted ten new negotiated leases outside their agreement area at a lease bonus of $12,000 per lease with a 24-month primary term. They have also invested more than a $100 million in a CO2 pipeline and recovery project in the Osage Burbank field this year. This is to convert the current water flood to a CO2 flood method of enhanced recovery that could net the Osages $1.2 billion dollars in royalty over the next 30 years,” he said.

Chaparral has been injecting CO2 into the North Burbank unit as a part of their CO2 EOR (enhanced oil recovery) Project since June 6, according to an article by World Oil. The project included the installation of a carbon dioxide gathering facility at a fertilizer plant in Coffeyville, Kan., and the laying of an 8-inch, 68-mile CO2 pipeline across northern Osage County. Chaparral is the third-largest CO2 EOR producer in the U.S.

Mark Fischer, Chaparral’s chairman, CEO, president and co-founder, told The Journal Record the project could recover an additional 88 million barrels of oil from the field.

Doug Hock, Encana spokesman told The Journal Record the company sold its assets in Osage County as part of its ongoing portfolio management process. Selling the assets will allow the company to participate in other oil and gas opportunities.