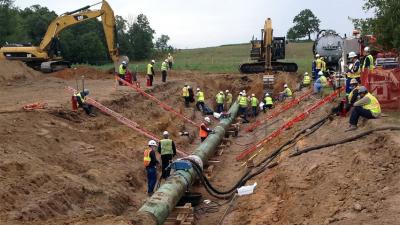 The Osage Nation is no longer accepting applications for the Enbridge Inc. Flanagan South Pipeline project set to start Aug. 7.

The Osage Nation Education Department and the ON Human Resources Department have successfully trained more than 400 workers for the project.

“We expected to originally get 200 jobs. So we were thinking about running 300 in our pool. Then we had additional jobs added and right now we are sitting at 400 in our database, of trained, ready to go to work, drug tested, all the training requirements that have been offered to them. Currently we are not taking applications for additional work so we think we have plenty of applicants to meet our numbers,” said Ida Doyle, ON Education Department director. “We are still taking applicants names and numbers because if additional work comes up we want to have a pool of possible people that could go to work. 798 (welding union out of Tulsa) told us today they have pipeline jobs all over the country if people are willing to travel.”

All training was free for those who came through the ON Education Department, paid for by the Pawhuska Business Strategy Center and the unions, said Jana Scimeca, ON Human Resources compensation analyst.

The Flanagan South project, a nearly 600-mile crude oil pipeline that originates in Flanagan, Ill., and ends in Cushing, Okla., will require more than 600 employees to lay a 36-inch pipe this side of Independence, Kans., to Cushing. Osage County will lay the last 300-mile stretch. The partnership between the Nation and Enbridge is that the Nation gets to provide 25 percent of the work force, while unions and contractors make up the rest. First preference is for Osage tribal members, then Native Americans, then non-Natives.

Some of the work has begun in Independence, where one of two warehouses is located. The second warehouse is located in Sand Springs, Okla., said Scimeca, and workers will be working out of both warehouses simultaneously.

“The numbers are growing everyday, we’ve already given some job assignments to a few, and we’ll be contacting some others right away to show up the middle of August to the Independence warehouse. We get daily information from the contractor or the unions as to what their needs are going forward,” Scimeca said.

The four unions working on the project are Welding-798 out of Tulsa, Operators-627 out of Tulsa, Teamsters, and Laborers-350, out of Springer, Okla.

“Met with Superintendent for the U.S. Pipeline yesterday (in Independence), we were awarded a few jobs at this point in early stages from the U.S. Pipeline contractor,” Scimeca said. “We are waiting to hear of other positions that will come to us from all four unions.”

The project will start in Independence and workers will move north near Iola, Kans., and Warrensburg, Mo., early in the project, Scimeca said. Then workers will move south of Warrensburg. Crews will then be dispatched to Sand Springs to the south warehouse. Both operations, the north and the south, are called spread three and spread four and both will work simultaneously.

“They will be working together and moving toward the center of the 300-mile stretch. So they kind of maximize their project time, instead of everyone moving south, the north and south will work and come together, that was the contractor’s decision to do that,” Scimeca said.

Enbridge Inc. plans to spend $8.8 billion in the U.S. to transport greater volumes of petroleum to refinery hubs in the Gulf Coast region and other markets, according to an L.A. Times article. The company will transport more petroleum than TransCanda would with its Keystone XL pipeline project from Alberta, Canada, to the Gulf Coast, according to the article.

Enbridge Inc. runs the longest pipeline system in Canada and the U.S.

According to Enbridge.com, “Enbridge’s policy lays out key principles for Aboriginal relations, such as respect for traditional ways and land, heritage sites, the environment, and recognition of unique legal and constitutional rights. The policy is designed to ensure that Aboriginal and Native American people near our projects and operations receive sustainable benefits.”

For more information on the Flanagan South Pipeline Project, visitwww.enbridge.com/flanagansouthpipeline.