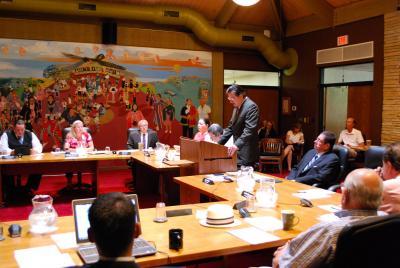 Former Osage Nation Gaming Commissioner Richard Chissoe is being considered for an appointment to the National Indian Gaming Commission, which provides regulatory oversight to gaming activities on Indian land.

On July 9, Chissoe appeared before the Third Osage Nation Congress and asked for a resolution in support of his appointment to the NIGC during the sixth special session. After Chissoe addressed the Congress regarding his resolution request, the Congress voted 11-0 to approve the resolution (ONCR 13-15 sponsored by Congressional Speaker Raymond Red Corn).

Chissoe (Osage) serves as commissioner on the Laguna Pueblo Gaming Control Board and lives in nearby Albuquerque, N.M. He is a University of New Mexico alumnus and is active with organizations including the National Tribal Gaming Commissioners and Regulators Association and the National Indian Gaming Association, according to the resolution.

“I am currently under consideration for the position of chairman of the NIGC,” Chissoe told Congress. “My name has been submitted to the Senate Committee on Indian Affairs, my resume has been solicited by the White House for consideration.”

Established by the Indian Gaming Regulatory Act of 1988, The NIGC is an independent regulatory agency charged with providing federal regulatory oversight to the Indian gaming industry, which is comprised of over 200 tribes nationwide for economic development, Chissoe said.

Chissoe’s prior experience in working with the NIGC includes serving two years on its Minimal Internal Control Standards (MICS) Tribal Advisory Committee and he speaks at Continuing Legal Education conferences, the resolution states.

“Part of this (NIGC appointment) consideration includes the vetting process, background checks,” said Chissoe, “Part of that examination includes looking for feedback from Indian Country and I have received a number of recommendations and nominations from other tribal jurisdictions and individuals but it is important to me personally that I receive a nomination from my own people – I’m asking for that today.”

If Chissoe is selected for the full-time NIGC position, he would relocate to Washington, D.C., where the NIGC is based. According to the NIGC Web page, “the Commission is to adhere to the principles of good government, including transparency and agency accountability; to promote fiscal responsibility; to operate with consistency and clarity to ensure fairness in the administration of IGRA; and to respect the capabilities and responsibilities of each sovereign tribal nation in order to fully promote tribal economic development, self-sufficiency and strong tribal governments.”

“I’ve known Mr. Chissoe for probably his entire life and I have nothing bad to say, everything is good. Some tribal members do know Richard from the gaming industry and he is very highly respected at the National Congress of American Indians … you have a lot of support at NCAI.”

Chissoe’s resolution of support passed with 11 unanimous votes and one absence from Congressman Archie Mason.

Chissoe received another resolution of support from the Intertribal Council of Five Civilized Tribes, which met July 11-12 in Sulphur, Okla., according to a Chickasaw Times article.

It’s unknown when the appointment decision will be announced pending the vetting process. Chissoe said the process could take months and the NIGC will likely have an interim commissioner until that time. He said there is also a public comment period that must take place and that could last 30-60 days.

The ON Congressional resolution concludes with: “The Osage Nation Congress hereby expresses its sincere support for the appointment of Richard Chissoe to the National Indian Gaming Commission, and further commends him for the great accomplishments he has achieved throughout his career in the field of gaming.”