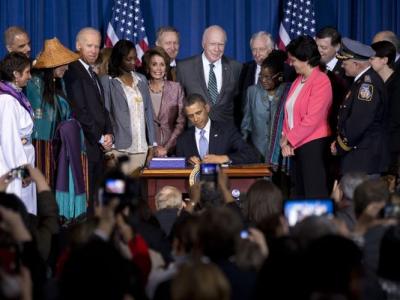 LaVina Clark is a busy woman. She is a Domestic Violence victims advocate for the Osage Nation and she is on call 24 hours a day, seven days a week and has been for the past eight years.

From January of this year through June, she and her staff issued 92 protective orders for Osage County. Seven were issued through Osage tribal court and 85 through the county. The Osage Nation has the only shelter in the area and Clark’s staff housed 22 women and 13 children during that time.

“We were busy through that period, that was the busiest time we have ever had,” Clark said. “We do all the protective orders for Osage County.”

The Nation’s domestic violence program operates from two grants, which stipulate Clark cannot discriminate based on race. Clark provides counseling, she has her cell phone at all times, she provides support in filling out protective orders, following through with clients at both the tribal and county court level, “we see protective orders all the way through.”

For a long time, there were no Osage laws that addressed domestic violence. The laws only pertain to Osage land, which is an area of checkerboard trust land in the county. The Osage Nation Police Department, the ON Trial Court and the ON Attorney General have jurisdiction in those areas.

“When I first came aboard in 2005, if we had an Osage lady out in Indian Camp that lived on Osage tribal land, we could do protective orders for her. Then all of a sudden, about 3-4 years ago, they said we couldn’t anymore because we didn’t have the codes and they didn’t have that in place,” Clark said. “So our ladies were unprotected. Then about two years ago our codes got passed through Osage Congress and that we could do the protective orders through the tribe.”

With the signing of the third reauthorization of the Violence Against Women Act this year, tribes will be able to exercise their sovereignty to prosecute, convict, and sentence both Natives and non-Natives who assault Native American women on Indian land.

However, the changes to VAWA won’t go into effect until March 7, 2015 but the Department of Justice and the Department of the Interior in conjunction will use pilot programs to determine best practices for the expanded jurisdiction tribes will exercise.

“I attended the DOJ meeting where they set out the requirements for additional jurisdiction under the new VAWA law. Our court (Osage Nation) meets all the requirements,” said ON Attorney General Jeff Jones. “I made application to be a pilot program under the new VAWA legislation but have not heard anything back from anyone. As I recall, to prosecute white defendants under the new VAWA law you have to have a public defender system, lawyer for a judge, ability to seat a jury that mirrors the population (in other words, not a jury where every juror is a Native American).

“We meet each of the requirements so we will be able to prosecute under the new VAWA law when it gets implemented in 2015.”

Parker’s own personal story changed the tide to get the third reauthorization of VAWA passed through the U.S. legislature.

“Three out of five of our women and children will be sexually assaulted on our reservations,” Parker said. “Our statistics were the worst in the country … 88 percent of crimes against Native American women were by non-Natives.”

According to a 2010 Government Accountability Office report, federal prosecutors declined to pursue two-thirds of sexual abuse cases from Indian Country between 2005 and 2009.

Help is on the way

So far, Clark has only been involved in three domestic violence cases in the ON tribal court. Most of her time is spent at the county court.

Jones said he has not seen a big problem of domestic violence in the Osage, since he has not yet prosecuted a domestic violence case in tribal court. But, when asked if he sees many non-Natives committing crimes against Native women in the county courts, he said he didn’t know.

“I do not know of anyone who tracks the ethnicity of the defendants in any type of criminal proceeding, so do not know how you would come up with those numbers,” Jones said. “I know that with each case filed there is a warrant issued and on the warrant it states whether the person is Native American, white, Hispanic, etc. But it would be tedious looking through each case. Judge Tate told me that he sentenced 72 defendants in misdemeanor domestic violence cases in 2012, so there are a large number of cases, but I do not know who is tracking whether they are Native Americans.”

Clark is working in conjunction with the ONPD, giving them her business cards, domestic violence help information, packets to instruct women on how to get a protective order.

“We have a crisis line, we have the officers give them our card, see if they’ll come in the next day. We can’t call them, because we don’t know if they’re back with their abuser, we could put them in jeopardy, so they have to make the first call. When they do make that call we check to see if they’re in a safe place. Are they alright? Do they need anything? I’ve even went as far as if you are across the street in the middle of the night, I will come pick you up,” Clark said. “But we hardly ever get calls like that. But we are trying to establish that if they (ONPD) get a call then they will let them know our services.”

She said they provide counseling and every Tuesday night they have a survivor group that meets. They have emergency assistance to help pay the first month’s rent, bills, furniture and anything else a person or family might need to start over. She’s put people on planes, buses, so they could get back home, and sometimes home is another state.

In the Osage culture, there is a lot of honorings and dances for men, but not so many for women, Clark said. So she decided she wanted to spend a day of just honoring Osage women.

“I spoke with Mary Bighorse and asked her what roles do Osage women play in our society and she said that there were a lot,” Clark said. “We are the caregivers, we provide the meals, we make the men’s clothing. And, after I finished speaking with her I thought, we’re kind of awesome!”

On Oct. 19, the ON Counseling Center Domestic Violence Program, in conjunction with the ON Prevention Program will host, “Honoring Our Osage Sisters Day Dance.”

“This day is to honor our Osage women and their important roles within the tribe, letting them know they do not have to settle for a domestic violence relationship,” Clark said. “If you want to honor your wife, mother, sister, or auntie, come dance and enjoy this day with them!”

If you know of anyone that is suffering from domestic abuse or needs help, call the Domestic Violence Crisis Hotline at 1-866-897-4747.