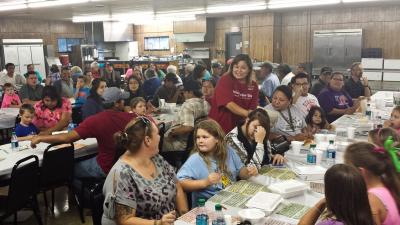 Five Osage women elected to the Pawhuska Indian Village committee last year, in wake of the investigation of the former board activities, expressed their appreciation to the community by holding a Sept. 23 thank you dinner and for helping them in their efforts to improve and maintain the village.

The board terms for Paula Stabler, Paula Farid, Rene Harris, Asa Cunningham and Jodell Heath expire this month and the next village committee election is scheduled Oct. 22 at Wakon Iron Hall at 7 p.m.

The board postponed the originally scheduled Oct. 15 village election due to a funeral at the chapel immediately east of Wakon Iron Hall. In addition to the Oct. 22 new election date, the board will also host its final regular monthly board meeting on Monday Oct. 21 at 7 p.m. with potluck at 6 p.m.

This is the first time in recent memory the commonly-known-as Five-Man Board for the Pawhuska village has been comprised of all women. Village residents elected the women during a special October 2012 election after the Osage Nation Congressional audit on the former board activities called for action in updating the village constitution. The board’s accounting practices were called into question after $806,000 in spending of village revenue was unaccounted for during a nearly four-year period. The Pawhuska village receives its revenue from its lease agreement with the Pawhuska Osage Casino, which sits in the southeast corner of the village jurisdiction.

After the audit, conducted by the ON Congressional Office of Fiscal Performance and Review, became public in September 2012, former board chairman Joe Don Mashunkashey resigned.

This summer, the U.S. Attorney’s Office announced it wouldn’t seek federal charges in the former Five-Man Board case. A months-long FBI investigation was conducted in wake of the audit report. ON Attorney General Jeff Jones also launched an investigation to determine if tribal criminal charges are warranted. The tribal investigation is still ongoing.

After the election, village committee chairwoman Paula Stabler said people helped the board in various ways including serving on its temporary day worker program to maintain the village grounds; volunteers built new wooden benches used during In-Lon-Schka; contractors and construction crews made improvements to Wakon Iron Hall and a regular meeting schedule was created to monitor and maintain village work duties and projects.

“We want to thank everyone helping us this year, those who gave us a hand,” Stabler told the Osage News. The committee planned the Sept. 23 event as a steak dinner with bingo games to be played afterward. Prizes included gift cards, a weed eater, T-shirts, an iPod, iPad, barbecue grill and a flat-screen TV.

About 150 people RSVP’d for the dinner prepared by Osage catering duo Joe and Brian Lookout. Stabler said one village committee priority is planning for new guest district arbors north of the main dance arbor. The committee is also looking at upgrading the dance ground restrooms and writing updates to the village constitution originally signed in January 1964.

Stabler, who previously served on the village committee, said the dinner is a repeat of a similar event held when she served the first time. She said the dinner showcases “community spirit” adding “we support our community as we see fit.”

The event cost about $3,000 with half to fund the dinner and rest for bingo prizes, Stabler said.

According to the Pawhuska village constitution, the committee comprises five members who are elected biennially by Osage tribal members, age 21 and over, who have resided in the village for at least 30 days prior to the election. The constitution also states no committee members shall derive any profit, gain, or remuneration through the operation and maintenance of public facilities in the Pawhuska Indian Village.