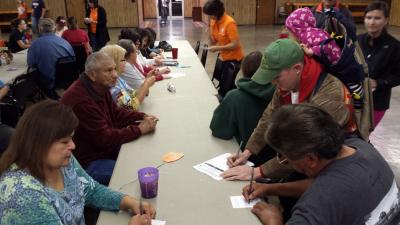 Pawhuska Indian Village Five Woman Board reelected for another term

Five Osage women were reelected to the Pawhuska Indian Village board Oct. 22. They will retain their terms for two more years.

Paula Stabler, Paula Farid, Rene Harris, Asa Cunningham and Jodell Heath received the most votes in the village election conducted by the Osage Nation Election Board. They were elected to the Pawhuska Indian Village board last year, in wake of the investigation of the former board activities.

After the election, Stabler said the board members agreed to keep their first-year officer assignments so she will remain chairwoman, Farid is vice-chairwoman, Harris is treasurer and Cunningham is secretary.

At the village board’s request the ON Election Board and Supervisor Alexis Rencountre conducted the election. It was the same arrangement that was requested with the 2012 special election, held after former chairman Joe Don Mashunkashey resigned in wake of an Osage Nation Congressional Office of Fiscal Performance and Review audit report that called into question the prior board operations and spending of village revenue.

Rencountre and the board called the election meeting to order and asked for nominations for board members. Residents nominated the five incumbents as well as fellow residents Ryan Red Corn and Sam Brothers.

Afterward, Rencountre and board members Walter Hopper, Shannon Lockett and Terry Hazen passed out small pieces of paper for the residents to pick five people for the board. Rencountre announced the voters must be Osage, village residents and over age 18.

After the residents submitted their board member picks anonymously on paper, the board and Rencountre tallied the ballots and announced the results within 30 minutes.

At a prior board meeting some members expressed interest in finishing projects and village improvements as reasons for seeking another term. The board held an emergency meeting after the election to review prospective contractors to repair the roof on Wakon Iron Hall. Stabler said leaks were discovered and the board would review estimates and proposals on at least three companies who submitted bids.

Other complaints heard by village residents are dilapidated abandoned homes, surrounded by overgrown grass, and sit unattended. Stabler and other board members also expressed interest in updating bylaws and regulations regarding the village.

Regularly scheduled board meetings will remain set for the third Monday of each month at 7 p.m. with community potluck one hour prior. The board will also hold weekly task meetings as needed to keep updated on village project work.

This is the first time in recent memory the commonly-known-as Five-Man Board for the Pawhuska village has been comprised of all women.