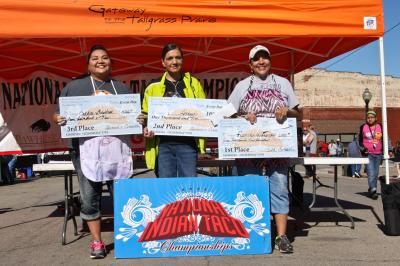 Indian taco dishes made by Osage and Pawnee cooks scored the highest and took top honors – and a year’s worth of bragging rights – in the 2013 National Indian Taco Championship competition held Oct. 5 in Pawhuska.

The People’s Choice winner this year was the “Osage Sisters” (No. 3) food booth operated by Dana Daylight, Mary Wildcat and Jacque Jones. The trio shared the $1,000 prize after scoring highest in the People’s Choice competition where spectators signed up to sample tacos from the contestants and score their best choices.

Hundreds of spectators attended the annual cooking competition held in front of the Triangle Building on a cordoned-off section of Kihekah. The 13 contestant food booths set up shop where they cooked much of the food on-site, sold to spectators and prepared entrees for the judging rounds announced by the Pawhuska Chamber of Commerce organizers and event emcees.

The contestants relied on their creativity and taste buds in creating their menus for the judges and their paying customers.

Beartrack named her booth “Goot Bites” and cut her frybread dough into nugget-sized pieces, which were fried in hot oil like a typical bigger frybread piece. She made her Indian taco entries by putting the smaller-sized frybread pieces into a paper dish then covered them with the usual Indian taco toppings of chili, cheese and vegetable garnishes. Beartrack also made dessert dishes by cutting frybread dough into bear-shaped patterns, frying the pieces to a golden brown color and covering them with sweet toppings such as honey, powdered sugar, whipped cream and strawberries.

Wearing a cloth apron with “Goot Bites” painted on the front, Beartrack said she decided to start cooking and selling her frybread creations last year. “At first people didn’t know what ‘Goot Bites’ were, but now they’re catching on,” she said while frying a batch of frybread pieces.

Other contestants stuck to the usual toppings for their Indian tacos including Lookout, whose simple recipe has not changed through the years she’s entered and placed in the annual competition. “I’m sticking to the basics,” said Lookout, whose taco dish consists of beef, lettuce, cheese, beans and mild salsa. Lookout cooked with the help of her daughter, to teach her how to cook at the competition.

Paula Mashunkashey and her daughter Julie Miller brought their “Rez Chicks Flour Co.” food booth back to the competition, which they’ve entered during the recent years. Children Joe Don and Lisa Mashunkashey also helped cook and make Indian tacos at the stand. They also sold dessert tacos topped with fruit, including peaches and strawberries with whipped cream.

“I’ve been returning every year, I’m loyal to Mr. Pawhuska,” said Paula Mashunkashey while she cooked frybread in hot oil. She said she was also thankful for the clear skies, which is a change from last year’s event, which was clouded by cold temperatures, morning rain and sleet.

The competition entries were reduced to the top three dishes which scored the highest after two rounds of judging and one celebrity round of judging from area high profile figures including Osage Nation Principal Chief John Red Eagle, Miss Indian Oklahoma Robynn Rulo (Osage) and Tulsa’s News on 6 anchor Craig Day.

Mary Bighorse was among the judges who scrutinized a round of judging. The process consisted of sampling one Indian taco dish from each of the competing food booths and writing down the numerical score each dish earned, based on the taste and presentation.

“The frybread was excellent, everything was not too much so (the toppings) complimented each other – you don’t want anything to overpower like chili,” Bighorse said, adding “it was a lot of fun” and she would not eat again, “not until late tonight.”

After the event organizers announced the results, each winner received their monetary prize and posed for photos. Beartrack joked and said “I told (my helpers) if I won, we’re going to the Tulsa State Fair and corndogs for everyone!”

Horsechief and her sister Lisa Pahsetopah – both with catering experience – entered the cooking competition together and placed first in 2009 with Pahsetopah winning for the dessert category available that year. The sisters continue to do Christian ministry work and cook at church-related functions

“It was awesome, I’m happy my daughter was here to help,” Horsechief said of daughter, Vada Horsechief, after accepting her prize. Horsechief said she is also in talks with cable TV’s The Food Network for a potential contract that could land her cooking show time where she’d prepare Native American traditional and healthy food dishes. “I also have a healthy frybread recipe with wheat flour,” she said as an example. If all goes well with contract talks, Horsechief said she could host a show that incorporates Native American history and dancing in with the cooking theme.

Horsechief said she’s also done TV cooking demonstrations in Oklahoma. As far as winning the competition, Horsechief said she plans on spending the winnings with her family, “and will invest in some restaurant kitchen equipment.”

To view more photos from this event, visit the Osage News Flickr page at www.flickr.com/photos/osagenews