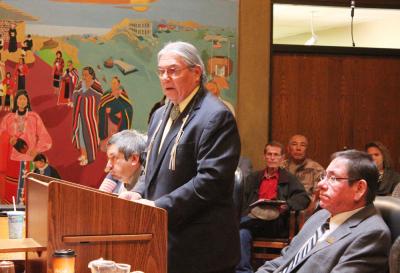 Eleven minutes, one motion, six allegations and one second is all it took for the Third Osage Nation Congress to make one more step to consider a removal trial for Principal Chief John Red Eagle.

During the Nov. 14 special session called for that specific reason, the legislative body heard a written motion by Congressman Archie Mason calling for a removal trial for Chief Red Eagle in accordance with the Congressional rules. Mason cited six allegations of wrongdoing against the Chief as causes needed to warrant a removal trial.

Afterward, Congressman John Maker seconded the motion to sustain it. No further action was taken on the motion during the 11-minute special session. Now the Congress has one day to consider its decision before voting whether to hold the removal trial during its Nov. 15 special session.

The six allegations are the same ones recommended for placement on a motion for removal of the Chief following the Select Committee of Inquiry investigation of the 15 allegations of wrongdoing made against the Chief this summer. According to the SCOI report, the committee recommends the six allegations be placed "on a motion for removal of Principal Chief John Red Eagle" for causes which include malfeasance in office, disregard of constitutional duties and oath of office, arrogation of power, abuse of the government process and undermining the integrity of the office.

Congressional Speaker Raymond Red Corn delivered opening remarks regarding the removal motion. Red Corn said he was notified that Chief Red Eagle “is not able to attend this morning.”

“By (Congressional) rule, the vote will occur tomorrow without deliberation. Any amendments to the Motion for Removal may be made tomorrow and considered prior to a vote on the main motion. As a courtesy to the Congress, I ask that any motion to amend be made in writing, and be submitted to the Clerk by close of business today.”

Mason, who sat on the SCOI to investigate the 15 allegations, took the podium when Red Corn announced the sole item of business listed on the special session agenda to read the motion for removal. Mason also addressed the public before reading the six allegations to be considered – should a removal trial be held.

“I stand here exercising my Congressional oversight responsibility which our Osage people expect and deserve. I stand here knowing my personal feelings and intense emotions will not stand in the way of my duties and obligation to the Osage people and the oath, which, I took. Therefore, I, Archie L. Mason, member of the Third Osage Nation Congress, hereby move to remove Principal Chief John D. Red Eagle from office by removal trial in accordance with Article XII of the Osage Constitution and the rules of the Osage Nation Congress for actions that warrant removal for cause.”

Mason then cited the six allegations, which will be focus of a removal trial, should one be held.

1.     Chief Red Eagle “interfered with an investigation of the Office of Attorney General of the Osage Nation, which constitutes malfeasance in office, disregard of constitutional duties and oath of office and arrogation of powers.”

2.     Chief Red Eagle “attempted to have the investigation being conducted by the Office of Attorney General of the Osage Nation terminated to give preferential treatment to an employee, which constitutes malfeasance in office, disregard of constitutional duties and oath of office and arrogation of power.”

3.     Chief Red Eagle “refused to uphold Osage Nation Law, ONCA 11-78, enacted by the (Congress) with a veto override on October 6, 2011, which delegates, “… full and sole control over all Mineral Estate Accounts…” (Section 2A) to the Osage Minerals Council, an independent agency within the Osage Nation. In response to the (OMC’s) letter requesting the release of accounts, he replied by letter stating, “the management of these accounts shall remain in the Osage Nation Treasury” which constitutes malfeasance in office, disregard of constitutional duties and oath of office, and arrogation of power.”

4.     Chief Red Eagle abused the power of his elected position to improperly influence the administration of the Osage Nation Election Board by forbidding disciplinary action against an Election Board employee, which constitutes malfeasance in office, disregard of constitutional duties and oath of office, and arrogation of power.”

5.     Chief Red Eagle “abused the power of his elected position to improperly withhold one or more contracts between the Osage Nation and Rod Hartness properly requested under the (Nation’s Open Records Act) by the Osage News staff and The Bigheart Times staff, which constitutes malfeasance in office, disregard of constitutional duties and oath of office, and arrogation of power.”

6.     Chief Red Eagle “violated Osage and federal laws, misusing public money of the Osage Nation by authorizing Paul Allen to be paid $73,334 in Osage Nation public monies for personal services contracts, for which he admittedly did no work to earn his fees, which constitutes malfeasance in office, abuse of the government process and undermining the integrity of the office.”

Mason closed by stating: “The foregoing allegations, if true, constitute grounds for removal from office for malfeasance in office, undermining the integrity of the office, disregard of constitutional duties and oath of office, arrogation of powers and abuse of the government process. If any of the allegations set forth herein are sustained by 5/6 of the Members of the Osage Nation Congress, Principal Chief Red Eagle will be removed from office, and will be further subject to disqualification to hold and enjoy any office of honor, trust or profit in the Osage Nation.”

Thursday’s special session comes less than a day after the ON Supreme Court declined a request from Chief Red Eagle for a temporary restraining order to prevent the special session from convening. The High Court issued its written order denying the request during the evening of Nov. 13.

Last week, the Chief filed suit against the Congress, Red Corn and former SCOI chairwoman/ Congresswoman Alice Buffalohead with the Supreme Court requesting a declaratory judgment ruling on the Congressional rules being used to consider his ousting from office. The Chief’s attorneys followed up with a Nov. 12 request for the temporary restraining order to stop the session from convening.

According to the Supreme Court order, Chief Red Eagle’s request for the temporary restraining order is denied because: “While Congressional action is imminent, it is unclear what action Congress will take. There is no immediate threat of harm to the Principal Chief.”

The Supreme Court also ruled the Chief will not suffer irreparable harm if the special session convenes. “Even if Congress proceeds with a removal vote, the Court will still have the opportunity to hear a request for fuller relief,” according to the order, which also states: “The public interest will not be negatively affected by allowing both the Legislative and Executive Branches of government to continue to perform their respective duties.”

The High Court did not rule on the Chief’s request for a declaratory judgment on the constitutionality of the Congressional rules on removal in addition to the temporary restraining order denial.

In a statement issued after the Nov. 14 special session, Chief Red Eagle said: “I’m sorry the Congress does not see that the manner in which they gathered evidence is flawed because hearsay was allowed. In addition, no court in the land would allow the grand jury to also serve as trial jury in the same matter, to do so would be unconstitutional, yet that is what is about to happen at the Osage Nation if the Supreme Court Justice does not intervene to stop it.”

Congress will meet at 9 a.m. to consider a vote on Mason’s motion for a removal trial of Chief Red Eagle. Eight votes are required for a trial to be held.