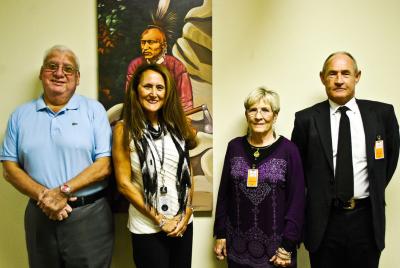 The Osage Nation’s five-member Gaming Enterprise Board barely has a quorum after one board member resigned and Principal Chief John Red Eagle did not reappoint the second board member after her term expired.

Stacy Laskey, who served as gaming board chairwoman for the past two years, was not reappointed by the Chief during the 2013 Tzi-Zho Session and therefore, her term expired at the session’s end in October. Chief Red Eagle appointed her to the board in May 2010 and she was confirmed that September by the Second ON Congress.

Gaming board vice chairman Randy Carnett resigned his post in early October, leaving the three remaining board members in charge of the gaming board, which provides oversight to the Nation’s Osage Casino gaming empire. Gaming revenue is the primary money source for the Nation’s governmental operations.

On Oct. 23, remaining board members Candy Thomas, Aaron Bighorse and Ralph Haymond Jr., met and held a new election of officers in wake of Laskey and Carnett’s departures.

Bighorse is now the gaming board chairman and Haymond is vice chairman. Thomas will remain the board’s secretary/treasurer.

Laskey declined to comment on her non-reappointment to the board. The Chief’s office also did not comment on the matter.

Carnett did not respond to an Osage News request for comment.

The Osage News inquired with Chief Red Eagle’s office once learning of Carnett’s resignation on Oct. 7. The Chief’s office confirmed Carnett’s resignation and issued the following statement: “In compliance with the bylaws of the Gaming Enterprise Board, Randy Carnett brought a potential conflict before the Board for review in order to protect the interests of the Osage Nation. I appreciate his service to the Osage Nation.”

The gaming board changeup is the latest event to occur less than a month before the ON Congressional Select Committee of Inquiry issued its Oct. 28 report on the 15 allegations of wrongdoing against Chief Red Eagle. Among the allegations raised in an August special session motion to create the investigative committee is No. 3, which alleges the Chief abused the power of his elected position to improperly influence the administration of the Osage Nation Gaming Enterprise Board by directing the Board, or its employee, to pay travel expenses of Board member Randy Carnett they had not authorized.

According to the report, the committee found there was “substantial evidence of influence by the Principal Chief on the travel approval process or ‘administration’ of the Gaming Enterprise Board” despite not recommending the allegation be placed on the motion for a removal trial.