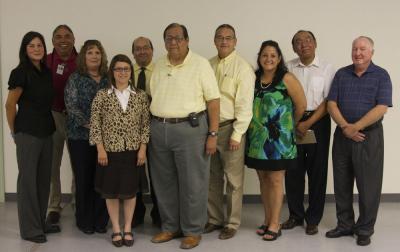 Principal Chief John Red Eagle told the Congressional Select Committee of Inquiry he was going to terminate the controversial Paul Allen contract by the first of the year – and he did on Nov. 28.

The Allen contract is one of the six allegations the Third Osage Nation Congress voted unanimously to hold a removal trial for Red Eagle, which will be held on Jan. 13 with Osage Nation Supreme Court Justice Jeanine Logan presiding.

According to the SCOI report made public Oct. 28, allegation No. 12: Chief Red Eagle violated Osage and federal laws by misusing public money of the Osage Nation by authorizing Paul Allen to be paid $73,334.00 in Osage Nation public monies for personal services contracts, for which he admittedly did no work to earn his fees. The SCOI recommended the Osage Nation Congress place the allegation on a motion for removal for malfeasance in office, abuse of the government process and undermining the integrity of the office.

The scope of work Allen was to perform in the 2013 contract almost mirrors Allen’s 2012 contract, which was called into question. The difference in the scope of work is Allen is asked to provide website consulting and any other communications or website duties assigned by Red Eagle. In the 2012 contract Allen was supposed to be maintaining Red Eagle’s website johnredeagle.com, monitoring Red Eagle’s blog and posts on a weekly basis and producing a monthly newsletter.