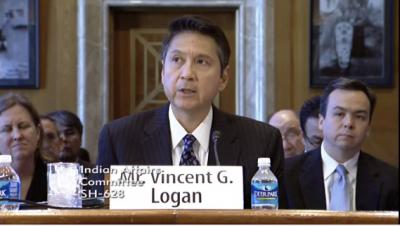 It’s been a year and three months since President Barack Obama nominated Osage investment professional Vince Logan as the next Special Trustee for American Indians in the U.S. Department of Interior.

No timeline has been set on when the U.S. Senate might confirm Logan for the post. The rift between Republicans and Democrats has been widely reported as the most-likely culprit for the delays in the confirmations of Obama’s appointments.

Cantwell asked Logan how he could better advise the U.S. Congress in carrying out its trust responsibilities with Native Americans, better implement the land buy-back program (currently being scrutinized by tribal governments across Indian Country), and was he aware of the huge responsibility and the litigation that preceded him?

Yes, he is aware.

“Senator, I am an Individual Account holder myself and I have been following the trust relationship since I was a child. The first time I went with my parents to the Osage Agency was in the 1960’s and I remember my father talking to the tribal and department officials at the time about his account lease monies,” Logan said. “Frankly, I’ve been aware of it that long and I respect all of the work that has been put forth to date. I am certainly well aware of the Cobell settlement, but for now I’m focused on … the current act and how it stands, and fulfilling my fiduciary duties and obligations in the current act.”

The American Indian Trust Fund Management Reform Act of 1994 created the Office of Special Trustee to improve the accountability and management of Indian funds held in trust by the federal government.

Logan said he has not been privy to the inner workings of the DOI because the information for the buy-back program and other functions have been somewhat classified. But, if he were to be confirmed, he would share the information with the committee and work toward improving the trust relationship with Indian Country.

Cantwell asked Logan why he wanted the position?

“When I first had discussions about this position, the part that caught my eye was the financial education. That is in the mandate, and is in the act Congress put forth. As I said in my opening statement, that is a passion of mine, financial education, not only on the institutional side, but the boards, tribal boards, tribal investment boards, but the real work is with children and Native youth,” he said. “That is ultimately the future of our people and it was clear that the Office of Special Trustee, while there are fiduciary duties to the beneficiaries, so important, part of the mandate is financial education. And I feel like, I know, that is the thing that caught my attention.

“That is the thing I am seeking here today, if I am confirmed, to work on that to the best of my ability and ultimately, that is the doctrine of self governance and of the trust relationship.”

Joining Logan at his confirmation was his long-time partner Dr. Steven Leiberman who is Chief of Staff for Veteran’s Affairs New Jersey Healthcare System; his sister, Jeanine Logan, who is an attorney in the Social Security Administration’s Office of Disability Adjudication and Review in Oklahoma City and who also serves as an Osage Nation Supreme Court Associate Justice; and Assistant Principal Chief Scott BigHorse.

“Vince Logan, a man whose family primarily comes from the Zon-Zo-Li’n District of the Osage Reservation, is well qualified to serve as the Special Trustee. His professional background, as an attorney and investment management, would serve him well in this position,” he said. “This office has been without a Special Trustee for far too long. As the trust commission continues its work, decisions will be made about reforming the federal trust system that has been broken for decades, individual Indians need a leader and an expert that is willing to listen and act for the betterment of Indians and Indian tribes.”

Logan is a direct descendant of Wah-Tian-Kah, the Osage who led the tribe to move to its present location where oil was discovered and the Osage minerals estate became the most important asset to the tribe. He was born in Pawnee Indian Hospital, raised in Norman, but has spent the majority of his life as a New Yorker. He comes from a family of public service, which he said makes him both proud and humble.

“My parents served this country during WWII and are interred not far from here at Arlington National Cemetery. My father, Oscar Logan Jr., joined the United States Marine Corps and fought with the 5th Division on Iwo Jima, where he was critically wounded and was awarded the Purple Heart for his combat service. And my mother, Della Morrell Logan, served in the United States Army during WWII as a nurse, stationed here in Washington.”

Currently, Logan is the owner of The Nations Group, LLC, which works with Native American tribes on asset management, investment strategies, and financial education. He worked in the Private Banking and Investment Group at Merrill Lynch from 2006 to 2009, and was a corporate finance attorney for Schulte, Roth, & Zabel from 2001 to 2006. Prior to that, Mr. Logan worked in the Antitrust Division at the United States Department of Justice from 1996 to 1998. He was appointed to the Oklahoma State University Foundation Board of Governors in 2010. Mr. Logan is a member of the Osage Nation. He received a B.S. from Oklahoma State University and a J.D. from the University Of Oklahoma College of Law.

Barrasso asked Logan about the $1.9 billion land buy-back program and what Logan saw as far as roles tribal leaders and governments would play in the process. Logan said the role the tribal community can put forth is through leadership and tribal consultation, because the tribes know the land well.

Tribal financial literacy was a concern for Barrasso and whether or not the trust could be restored between tribes and the DOI? Logan said his passion is education on financial literacy and if confirmed he would spend a great deal of his tenure on financial education for Indian Country. He said the trust relationship is not at its best, since the government failed to uphold its responsibility and the trust is broken for many in Indian Country, but he’s an optimist and would work tirelessly in rebuilding the trust.

“Trust has to be earned. It’s true in all businesses and government, it’s driven through leadership,” Logan said. “I’m an advocate for and behalf of the beneficiaries.”

A spokesman for the Senate Committee on Indian Affairs said a review over the answers and questions from the committee hearing will take place. If the committee is satisfied with Logan’s answers his nomination will move forward for a full Senate vote and then to the U.S. Congress.

Check back at osagenews.org for future updates on Logan’s confirmation.