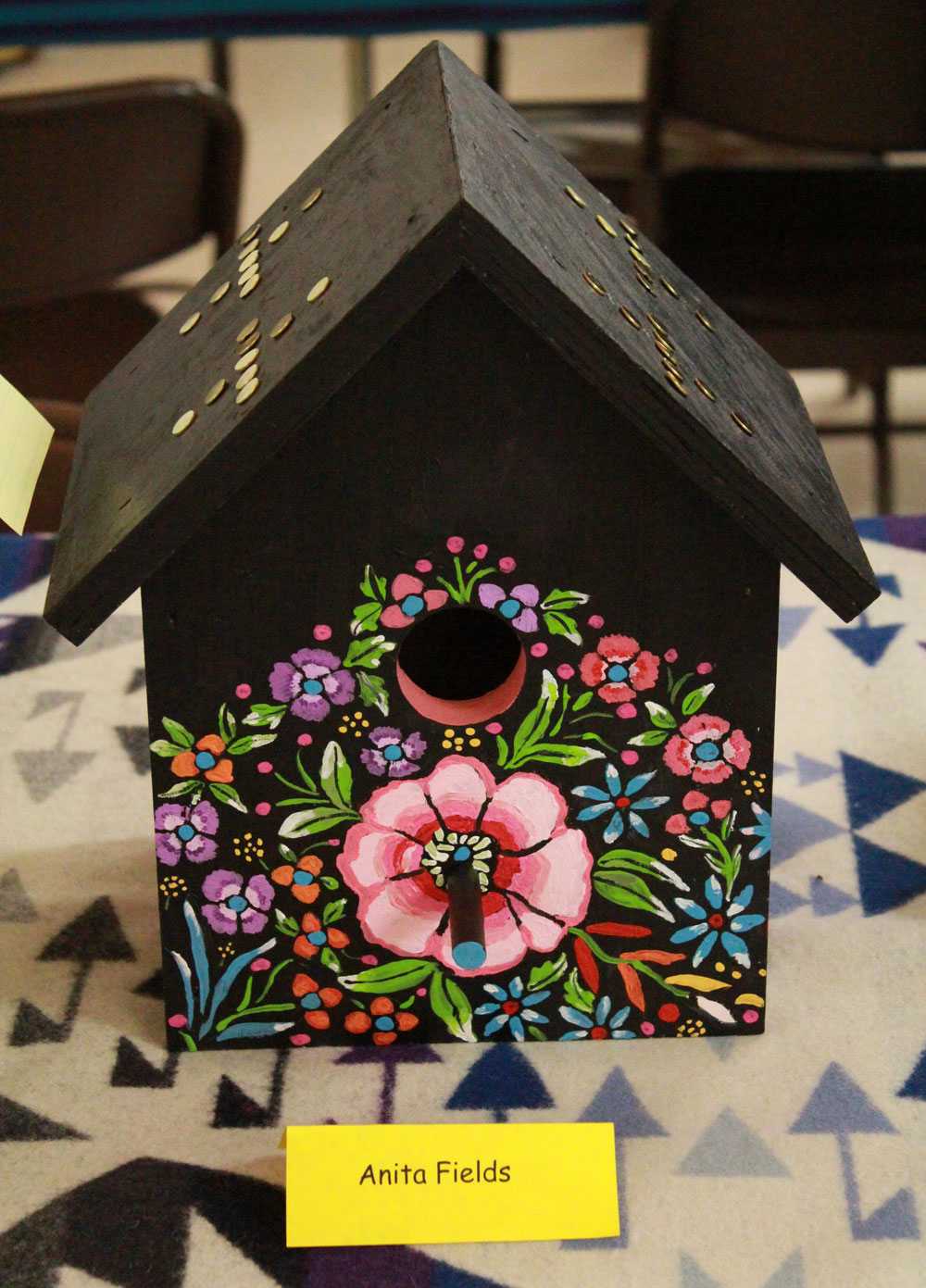 Stories of hope and support for Native American children in need made this year’s CASA Birdhouse & Apron auction a success.

Volunteers and organizers for the Court Appointed Special Advocates program for Pawnee and Osage counties offered more than 50 birdhouses and aprons for auction, with all proceeds going toward CASA office operations. More than $6,500 was raised.

The minimum bid for birdhouses was $50 and most sold between $50 and $200. Local tribal members made aprons, with some painted, others decorated for the holiday season, and some with ribbonwork. More than 50 people attended the event.

“In November of this year, in Osage District Court, we had 128 new children come in,” said Helen Norris, Pawnee/Osage CASA director. “And most of them Native.”

The highest selling birdhouse went to Wilson and Brenda Pipestem for $600 and was made by Osage artist Anita Fields. Her birdhouse, “Spanish Shawl,” was a colorful, intricately painted Spanish shawl design that Osage women frequently wear at the Osage In-Lon-Schka dances each June.

The second highest selling birdhouse was made by Jessica Harjo (Osage/Otoe) and sold for $590. Harjo’s birdhouse went to the Pipestem's and had a painted floral beadwork design on the roof and the body of the birdhouse was painted to represent the dawn.

Osage artist and CASA Advisory Board member, Ryan RedCorn, made the third highest selling birdhouse. It went to the owners of The Cedar Chest, Julie O’Keefe and Danette Daniels, for $510. RedCorn’s birdhouse was inspired by his youngest daughter’s cradleboard, with Osage symbols of the four directions on the sides.

Osage Nation Trial Court Judge, Marvin Stepson, spoke at the event and had nothing but praise about Norris and her CASA volunteers.

“Fifteen years ago I was a judge for Pawnee (Nation) when we got CASA in the court,” he said. “Helen does a great job … I worry about her because I think she’s putting in too much time, it’s her love, and I think she does a great job.”

Funding is minimal for the volunteers; most use their own funds for travel when checking on children. Norris said that one month she spent $800 on gasoline for her vehicle and her excuse to her concerned husband was, “Osage County is big.” Norris (Pawnee) resides in Fairfax with her husband Jim (Osage).

The volunteers are assigned to abused and neglected Native American children in the Osage County or Osage Tribal Court system and they monitor their living situation, school activity, and general well-being and report directly to the judge handling the child’s case.

“About 93 percent of the time, the judges take our word for it,” Norris said.

Norris recognized Cameron Pratt (Osage) at the event, a CASA volunteer and Osage language instructor. She said he was one of her best volunteers, is tireless and can always be counted on.

“These kids that have a hard time in school, at home … maybe you know some of these kids,” Pratt said. He said anything given to CASA would help these kids in need.

He brought his wife Nicole and three children to the event. His family’s birdhouse was an exact replica of the Peanuts cartoon character Snoopy the dog’s doghouse. On top was Snoopy and his pal Woodstock. His wife and children searched for Snoopy and Woodstock dolls but could not find any, so they molded the characters out of clay.

The Pawnee/Osage CASA program is majority funded out of the United Community Action Program in Pawnee. But a few years ago, funding woes nearly closed the program down.

“A few years ago we didn’t get a grant and I was crying around and Wilson Pipestem (Osage/Otoe), he came through, we wouldn’t be here if it wasn’t for him.” She didn’t say how much Pipestem gave to the program but it was substantial. She recognized Pipestem at the event.