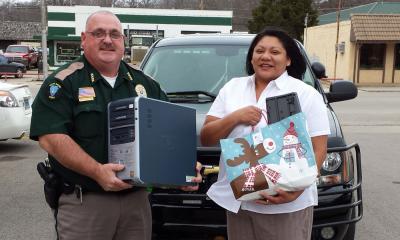 Marilyn Booth was confused when the Osage Nation Police showed up at her workplace and demanded she come outside.

“I didn’t know what was going on, my mind was racing,” Booth said, who works at the Osage Nation Tax Commission.

ON Police Chief Nick Williams and Investigator Mike Anderson led Booth outside to a waiting police car. With stern looks on their faces, they opened the back door and the computer was sitting in the back seat.

“When they told me they were giving my family a computer, and everyone was smiling and laughing, I was still so nervous … it didn’t register,” she said. “Then Chief Williams asked me if I was okay and if I had heard what he said. That’s when I realized my family got a new computer for Christmas.”

Booth, a mother of two who also looks after her niece and nephew, is one of five families chosen by the ONPD, in conjunction with the TANF Program (Temporary Assistance for Needy Families), in deciding which families receive the computers as part of the North Pole Computer Project. ONPD delivered the computers on Dec. 20.

The original Computers for Kids project evolved into a year-round operation that has provided computers for over 1,000 families. Approximately 200 children will use this year’s donated computers.

“This is the second year the Osage Nation Police Department has been involved in the North Pole Computer Project,” Anderson said. “I enjoy being involved with this project. This year we were given five computers to give out.”

This year’s recipients from the Osage Nation are:

“My family is very thankful to the ONPD and the North Pole Computer Project,” Booth said. “I look forward to my children being able to learn and grow from this experience.”

For more information about the North Pole Computer Project and PC Power, visitwww.TulsaPCPower.org.