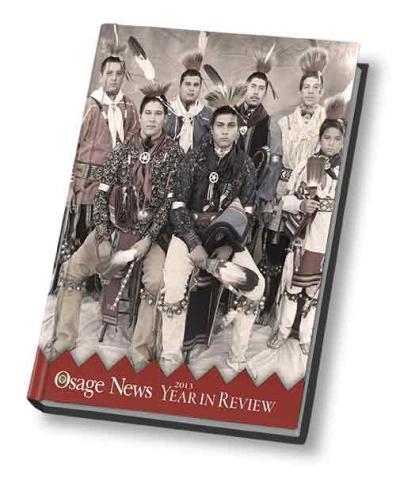 The Osage News 2013 Year in Review

The Osage News presents its Year in Review featuring highlights of 2013 news events and newsmakers involving Osages and the Osage Nation. The following are bulletpoints of those events.

Note: Osage Nation governmental offices will be closed Wednesday Jan. 1, 2014 in observance of New Year's Day. The Osage Newsstaff would like to wish everyone a Happy New Year.

·      The first round of settlement checks for the historical class-action case of Cobell v. Salazar were mailed. The $1,000 checks were mailed to the Historical Accounting Class on Dec. 17, throwing Osages for a loop since their checks were not mailed, but deposited in their IIM accounts – no other tribe’s checks were deposited.

·      The Association of New Mexico Osages held their second formal meeting Dec. 8, 2012. Speakers from the Nation’s cultural departments were invited to attend, as well as elected officials.

·      The newly-elected Pawhuska Village Five-Woman Board began work on cleaning up the village. Paula Stabler, Paula Farid, Jodell Heath, Asa Cunningham and Renee Harris were elected to serve the community.

·      The Osage Nation Foundation hosted its inaugural Christmas Celebration and raised around $12,000. The event had about 150 guests and the money raised went toward the Foundation’s summer youth camps.

·      Osage Nation Police Department gives computers to families in need on Christmas. The Osage Nation Election Board holds an election process hearing Feb. 12 at the ON Congressional Chambers. The meeting is a joint effort between the board and the Osage Congressional Committee on Governmental Operations.

·      Osage Nation Housing Department develops plans for a housing project in Skiatook. The Third ON Congress approves $750,000 to purchase land for the project (ONCA 13-05 Supernaw).

·      The Osage County Historical Society Museum catches on fire. Not many Osage items are damaged.

·      Construction begins on the Grayhorse arbor.

·      WNBA Tulsa Shock and Osage Casino announce marquee partnership. The Casino and Shock officials announced the partnership and unveiled the new jerseys at a Jan. 31 press conference at the BOK Center in downtown Tulsa.

·      BIA Osage Agency to implement a call center to track complaints and log them in a database.

·      Election hearing brings voter and candidate issues back to forefront. Absentee ballots, requiring candidate’s to put who paid for their campaign signage, True Ballot Inc., and others.

·      Ten Osage students travel to Washington, D.C., as part of the Close Up program, a weeklong learning session about the U.S. government.

·      Osage Minerals Council fires law firm Akin, Gump, Strauss, Hauer & Feld LLP, March 20. OMC members said they were not happy with the decisions made during the Negotiated Rulemaking Committee process and blamed some of the actions taken by the committee on the firm.

·      Osages reflect on the Wounded Knee Occupation of 1973 for the 40th anniversary. Raymond Lasley, Marvin Lasley, Louis Gray, Mary Bighorse, Andrew Gray and Gina Gray all were part of the occupation.

·      The ON Congress subpoenas Rod Hartness contract, with no success.

·      Oklahoma Attorney General says Nation does not have rights to water in Osage County.

·      Osage Nation website to get a new look. Construction on the site begins.

·      The Osage Nation Supreme Court is asked to rule on whether or not Principal Chief John Red Eagle can appoint his brother, Eddy Red Eagle, to the ONES board.

·      Proposed CFR changes spur discussion on writing ON Village laws. Debates on whether or not the Osage Nation should create and pass its own laws to run the villages with less federal oversight begins.

·      ON Congress votes 7-6 to appropriate $13 million for the campus master plan. Once again, Asst. Principal Chief Scott BigHorse is the tie-breaking vote for the appropriation.

·      The Wahzhazhe: An Osage Ballet performs in Washington, D.C., at the National Museum of the American Indian March 20-23.

·      ON Congress reissues subpoena for Rod Hartness contract after a signature page is missing on the subpoena.

·      The Nation bands together with 23 tribal nations in its hope to extend its tobacco compact with the state of Oklahoma till 2017.

·      The ON Health Authority Board gets four new members in Margie Burkhat, Michael Moore, Tom Foreman and William Tinker.

·      Legislation to start hospice care is tabled in the Osage Congressional Committee on Commerce.

·      The ON Supreme Court denied a claim for relief sought by the Third ON Congress in the inaugural declaratory judgment case filed against Principal Chief John Red Eagle regarding the board appointment of his older brother, Eddy Red Eagle Jr.

·      Osage Casinos in Skiatook and Ponca City hosted Topping Out ceremonies to celebrate construction milestones in the new casinos that will include hotels, restaurants and travel plazas.

·      A four-year water resource study on Osage lands by U.S. Geological Survey was signed May 21 by Chief Red Eagle. The study will help establish water conservation and responsible water planning in the Osage.

·      ON Congressional Subpoena debate over Rod Hartness contract continues in court documents. ON Treasurer Callie Catcher files a protective order against the congress to prevent them from taking her oral deposition on the matter.

·      Work continues on the FBI investigation in the former Pawhuska Village Five Man board activities.

·      AG Jeff Jones files a three-count written complaint describing two incidents where he believes Chief Red Eagle broke tribal law when he allegedly interfered with an investigation. This is the first time an ON AG has filed an ethics violation against a principal chief.

·      The Nation moves closer to finalizing a Tobacco Compact with the state as the deadline set by Governor Mary Fallin passes.

·      The ON Tax Commission begins offering free Elder Tags for Osages 65 years and older and free tags for disabled veterans. The law, sponsored by Congresswoman Maria Whitehorn, was signed into law April 9.

·      The Third ON Congress considers forming a Select Committee of Inquiry to investigate allegations against Chief Red Eagle.

·      Osage student Layton Lamsam is selected as a 2013 Udall Scholar. Lamsam is a senior at Stanford University majoring in biology.

·      Osage News Editorial Board swears in board member Teresa Trumbly Lamsam via Skype on June 27.

·      The ON Tax Commission staff attends the United Osages of Southern California meeting May 18 in Carlsbad, Calif. They take photos of tribal members and offer photo ID cards offered by the Tax Commission.

·      Enbridge Inc. awards Nation with $20,000 grant to build a broadband tower, to be placed near the ON Emergency Services office.

·      The ON Congress receives a list of 15 allegations made against Chief Red Eagle on July 8 during its special session. On July 9, the congress approved a motion to form a Select Committee of Inquiry to investigate the allegations.

·      Chief Red Eagle responds to ethics allegations from the ON AG Jeff Jones and says they are unfounded and he never interfered in any investigation by the AG’s office.

·      ON Police Department seizes $45,000 worth of marijuana in Fairfax. Plants were being grown on restricted land west of town, two blocks from elementary school.

·      The Nation plans Maria Tallchief tribute on Aug. 9 at the Bartlesville Community Center. Diana Gomez, principle dancer for the Tulsa Ballet, performs a rendition of, “The White Swan,” originally composed for Tallchief by her then-husband, renowned choreographer, George Balanchine.

·      The ON Congress passes a resolution supporting the nomination of Osage investor Vince Logan to be the next Special Trustee for American Indians. Based in New York, Logan is owner of The Nations Group, LLC, an investment consulting firm focused on Native America with experience in private banking as a corporate attorney.

·      Osages honor the historical French connection with the Osage by dedicating a monument in front of the Osage Tribal Museum. A French delegation attends for the honor and more than 30 Osages attend the celebration.

·      Osage Nation firefighters help with wildfires in Colorado and Arizona.

·      U.S. Attorney’s office declines to prosecute former Pawhuska Five-Man Board case. The U.S. Attorney’s office and the FBI said no federal charges would be coming. The investigation into the former board activities launched after an ON Congressional Office of Fiscal Performance and Review audit was attempted in 2012. More than $806,000 from village money was unaccounted for, according to the report.

·      Chief Red Eagle attempts to have the Osage News’ case against him dismissed. Associate Judge Lee Stout denies the dismissal.

·      Nation asks for help from Osage County in fight against eagle kill permits requested by Wind Capital Group. The Nation notes that it has contributed more than $36.3 million to Osage County roads and bridges since 2009.

·      The AG’s ethics case against Chief Red Eagle is delayed after Red Eagle’s attorneys file a continuance due to the 15 allegations and Congressional Select Committee of Inquiry testimony and work Red Eagle and his attorneys needed to focus on.

·      Osage Casinos share org chart and ethnicity of employees for the first time with the public.

·      Jodie Revard is appointed to the Osage Foundation Board.

·      The Select Committee of Inquiry continues its work into the 15 allegations against Chief Red Eagle.

·      Osage Minerals Council at odds over storage unit and its contents bought by Councilwoman Cynthia Boone at auction.

·      The ON Communities of Excellence department leads the trend of using locally grown vegetables to combat diabetes, obesity and heart disease. They host a Champions of Health & Rising Star Advocates for Healthy Living awards banquet and honor community leaders who have advocated for healthy eating and living.

·      The Nation joins with The Nature Conservancy to develop best practices of the preservation of eagles, raptors and other migratory birds as they combat the wind farm coming to Osage County.

·      Paula Stabler, Jodell Heath, Paula Farid, Renee Harris and Asa Cunningham were all re-elected to the Pawhuska Village Five-Woman Board on Oct. 22.

·      Chief Red Eagle does not reappoint Stacey Laskey to the ON Gaming Enterprise Board and GEB member Randy Carnett resigns.