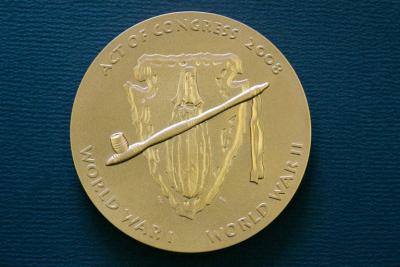 Osages and the general public now have the opportunity to own a bronze coin replica of the Osage Nation Code Talker Gold Medal now being sold by the United States Mint.

The bronze coin is a duplicate of the Osage Nation Code Talker Congressional Gold Medal recently presented to the tribe during a November ceremony where 33 gold medals were awarded to those tribes whose members served in World War I and II and used their native languages as code to relay radio messages to fellow soldiers during battle.

Two sizes of the bronze coin replicas are available for sale through the U.S. Mint website at www.usmint.gov. A 3-inch coin is $39.95 and a 1.5-inch coin is $6.95. According to the website, a description of the coin design reads: “The obverse design depicts a code talker looking up and focusing on his task. The barbed wire is symbolic of the threat to the soldier.”

The Congressional Gold Medal honoring is part of fulfilling the Code Talkers Recognition Act of 2008 signed into law by then-President George W. Bush. According to the act, it requires the issuance of the gold medals “to express the sense of the Congress that the service of Native American code talkers to the United States deserves immediate recognition for dedication and valor; and honoring Native American code talkers is long overdue.”

The first reported use of Native American code talkers during wartime was on Oct. 17, 1918, the act states.

On Nov. 20, the U.S. Congress hosted the Gold Medal ceremony in Washington’s Emancipation Hall and invited surviving military veterans who served as code talkers during wartime, their family members, surviving families of code talker veterans who have since passed on and tribal officials representing the tribes honored at the event.

This was the first time that Osage Code Talkers had been honored for their efforts during World War I, John Henry Mashunkashey said in a statement from the Chief’s office. “We had code talkers in artillery and infantry, who spoke to one another on radios calling information back and forth about incoming rounds,” he said.

“Previously the tribes had been reluctant to talk about their code talking during World War I and II. President George W. Bush made it public so that we could talk about it,” Mashunkashey said. “The Navajo code talkers were honored first because they had a program that was developed by the Marine Corps during World War II.”

The U.S. Mint and the Department of Defense first contacted the Chief’s office in 2010, according to the Chief’s statement. Images of the proposed coin were sent to Chief Red Eagle for his consideration and he asked John Henry and Ahnawake Mashunkashey to assist in approving the coin’s design. The coin depicts Osage Code Talkers on the front and the Osage Nation seal on the back of the coin.

Principal Chief Red Eagle, who accepted the award on behalf of the Nation said in a statement: “It was a very honorable experience to be there to accept this for all the veterans who served in these wars. I had a sense that we were representing all Osage veterans.

“We want the Osage people and the Osage veterans to know about this honor.”

A silver version of this coin is available to families who have Osage World War I veterans within their families, once a verification process by the U.S. Department of Defense has finished, the Chief’s office said.

If families have knowledge of Osage World War I veterans within their family, they may provide proof through written documents and photos of the veteran submitted to the Department of Defense. The Osage Tribal Museum and Library has a list of Osages who served in World War I, and are willing to share this information with families seeking the information. This information may be shared with John Henry Mashunkashey who will assist in forwarding the information to the Department of Defense. His e-mail is:johnawake65@windstream.net.