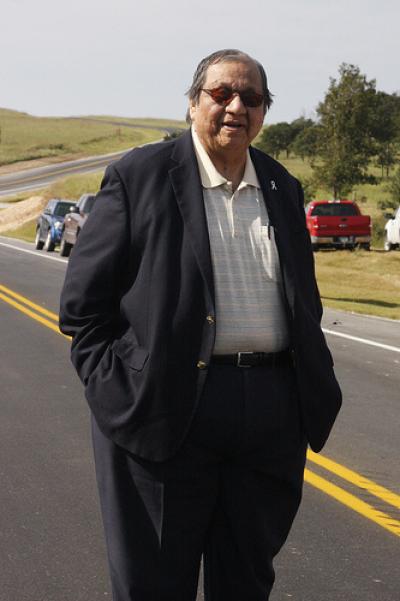 The Osage Nation Supreme Court denied Principal Chief John Red Eagle’s request for relief in his lawsuit challenging the ON Congressional rules on removal – filed in wake of a Congressional committee investigation and 12-0 vote for his removal trial scheduled Jan. 13.

In a slip opinion issued Jan. 2, the High Court disagreed with the Chief’s arguments that the removal rules violated the 2006 Osage Constitution, that he had not been afforded due process and declined to void the entire removal process he’s questioned since the Congress voted last summer to form a Select Committee of Inquiry to investigate 15 allegations of wrongdoing placed against him. That investigation resulted in an October 2013 report recommending the Congress hold a removal trial to consider six of those allegations, which warrant cause for the trial.

One month later, Congress voted 12-0 for the removal trial, prompting Chief Red Eagle to file suit against the ON Congress, Congressional Speaker Raymond Red Corn and Congresswoman Alice Buffalohead, who both sat on the Congressional Select Committee of Inquiry, with Buffalohead serving as chairwoman. Red Eagle requested a declaratory judgment from the Supreme Court "to determine the constitutionality of the removal process conducted by Osage Nation Congress beginning July 8, 2013 to present under Removal Rules promulgated by Congress."

In its opinion, the Supreme Court said, “we find that the Principal Chief at all times received proper notice of the allegations against him, that he had notice of the applicable rules, and that he has received the evidence against him. Furthermore, he was given reasonable time to prepare for the removal trial. The removal trial is the Principal Chief’s opportunity to address the charges against him.”

The Supreme Court also stated, “The removal trial itself is where the parties must establish whether the Constitution supports their respective positions. Article XII (The Osage Constitution section regarding removal of appointed and elected officials) due process requirements have been satisfied up to this point in the process.”

In a Jan. 3 joint statement, Red Corn and Buffalohead said: “Overall, we are satisfied with the Osage Nation Supreme Court opinion handed down last night. Through its opinion, the Court reassured us and the Nation that the Osage Constitution will be upheld, and not ignored.”

Chief Red Eagle also issued a statement on the ruling and said: “We thought it likely that the court would allow the trial to go forward, but had high hopes that they would determine that ‘meaningful due process’ during the investigatory phase would include an opportunity for the Chief to defend himself or to at least be fully represented in a manner that allowed the ‘evidence’ to be questioned or impeached. This would allow the Congress better information upon which to base any decision. Congress rules simply allow the Chief’s attorneys to attend as observers and that does not allow adequate representation or defense.”

The Chief also stated: “The Court simply denied my petition without making any substantive rulings that could serve as guidance going forward. The Justices implied that the petition was too early to determine whether due process occurred, and that the trial needed to happen before I could raise other questions about due process. Because the inquiry process did not provide me an opportunity to defend myself, I am preparing my defense in expectation of being exonerated from these allegations."

This is the first time in the history of the reformed government that the ON Congress has used the removal process to consider impeaching an elected or appointed tribal official from office. With a removal trial under consideration, Chief Red Eagle filed suit on Nov. 7 asking the Supreme Court to opine on interpreting the Constitution’s Article XII regarding removal with a request for a declaratory judgment ruling. Passed into a 2012 law, the ON Supreme Court has original jurisdiction over actions for declaratory judgment between the legislative and executive branches, filed by either party against the other, to resolve disputes over interpretation of the language or provisions contained in the Osage Constitution.

In its opinion, the Supreme Court said the Constitution’s Article XII gives Congress the power to remove elected and appointed ON officials. The court also noted: “As representatives elected by the Osage people, it is expected that Congress act as champions and advocates for the Osage people. Unlike the judiciary, whose credibility is based upon its objectivity, Congress is not required to be unbiased, impartial or objective at all times. Instead, Congress is charged with being fully apprised of the issues its constituents face and to formulate positions and opinions to address those issues in a manner that benefits the Nation as a whole.”

The Congress, through its attorney Loyed “Trey” Gill, responded to the Chief’s lawsuit arguing Chief Red Eagle was afforded due process throughout the SCOI investigation. The Chief was given public notice of the SCOI meetings and he was allowed to attend in-person or through legal counsel, per the Congressional rules. The SCOI met over the course of two special sessions and parts of the September 2013 Tzi-Zho Session before issuing its investigation report on Oct. 28.

Much of the SCOI proceedings were held in executive session with the Chief allowed to attend the closed-door meetings (except meeting portions involving committee deliberations and Congressional attorney-client privileges). The Congressional rules also prohibited the Chief or his attorneys from speaking or participating in the meetings primarily held to gather evidence and interview witnesses regarding the 15 initial allegations. By the end of the investigation, about 40 people were interviewed by the SCOI. Oklahoma City-based attorneys Kirke Kickingbird and James Burson are representing the Chief in this case and attended the SCOI meetings with Chief Red Eagle, or on his behalf.

In defending himself, Chief Red Eagle pointed to a historical cultural reference written by ethnographer Francis Le Flesche regarding the Chief’s position. The Le Flesche reference – filed as a supporting legal brief document by Chief Red Eagle’s attorneys – stated Osage chiefs hold “an office that shall be greatest in sanctity and in dignity.”

The Supreme Court – also citing historical works by Garrick Bailey and Le Flesche - wrote in a footnote: “The Principal Chief also attempts to argue that ‘Osage tradition and culture with its view of the sacred status of Chiefs’ somehow exempts the Principal Chief from removal. Even from a historical and cultural perspective, however, we note that the chiefs, while held in high esteem, were limited in their power. ‘Greater authority rested in the collective hands of priests who controlled the relationship between the Osages and the external world, both visible and invisible. In matters of both war and peace, they were the ultimate authority… [T]he whole tribal structure and even the offices of the chiefs were creations of the priests.’”

Regarding the 2006 reformed government structure, the Supreme Court said: “If Congress determines that an official engaged in conduct unworthy of his or her office, it has a responsibility to investigate it, and is authorized by the Constitution to take appropriate action outside of the judicial process … Not even the Judiciary has the authority to remove an official. Article XII Removal is reserved to Congress and Congress alone.”

Article XII states the power to remove elected or appointed ON officers originates in the ON Congress, but the Supreme Court notes “Congress cannot simply vote to remove based on unspecific actions. Congress is also bound by the Constitution’s Code of Ethics when conducting its investigations.”

“The Constitution does not dictate the means and methods by which Congress determines whether a motion for removal is warranted,” stated the opinion, “Congress’ ability to investigate should not be encumbered, allowing it to gather as much information as possible.”

The Supreme Court said Article XII provides basic elements of due process to those subject to removal proceedings, which are: notice, an opportunity to be heard and that removal from office is justified.”

The Supreme Court closed its opinion by stating: “Given the gravity of the matter before us, we must consider our path forward and the precedent we have set. We acknowledge the influence of past historical and cultural Osage governments throughout our long history, and we acknowledge how we have continuously reshaped, restructured and reinvented ourselves as a Nation. Our ancestors were ‘logical, rational and pragmatic people struggling to understand and survive in a world of infinite complexity.’ As we consider the complexity of the issues that arise before us, we use the lens of a dynamic people who adapted and endured and in doing so we strive to carry their legacy forward with meaning and purpose.”

The removal trial is slated to begin Jan. 13 during a Special Session of Congress. Associate Supreme Court Justice Logan will preside over the removal trial. Ten of the 12-member congress must vote "yes" to remove Chief Red Eagle from office.

To read a copy of the ON Supreme Court’s opinion, visit:http://osagenation.co/government/judicial/judicial-notices/