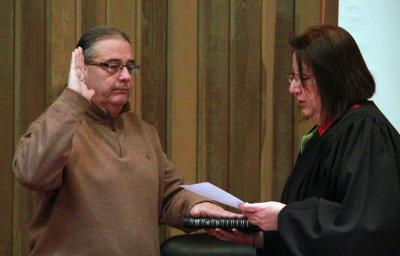 BigHorse, who has been Assistant Principal Chief for the past three years, had no comment to the media as he left through the Osage Minerals Council side entrance, led by his son Norris Bighorse, his brother Pete Bighorse and nephew John Starr Bighorse.

Former Chief Red Eagle had roughly six months left in his term. His term would have ended in July when the new principal chief was sworn into office. Since Red Eagle is prohibited from enjoying any future office of honor, trust or profit in the Osage Nation, his name has been removed from possible candidates in the Primary Election, which takes place March 10. That drops the chief candidates to three: Geoffrey Standing Bear, Margo Gray and Tom Boone.

BigHorse has been a spokesman for the tribe against the wind farms coming to Osage County, speaking to the tribe’s culture and traditions and how the wind farms will impact the tribe’s use of the eagle feather. He is often an ambassador, along with his brother Vann Bighorse who is the director of the Wah-Zha-Zhi Cultural Center. The duo often attends various cultural events around the country, singing at the drum. He is also a shareholder.

In 2011, BigHorse was commended by the Oklahoma House of Representatives and was also recognized by the Tulsa City Council and the Christian Minister’s Alliance.

In 2006, he was elected to the 51st Oklahoma State Legislature and served as a State Representative for Osage County. Prior to his service in the Oklahoma House, he worked for 24 years in state government: thirteen years at the D. Conner Correctional Center (DCCC), and nine years contracting with the state, opening the only co-facilitated Juvenile Detention Center in the state.

According to his Assistant Principal Chief candidate statement in 2010, he said:

“I am also dedicated to promoting programs for our children and grandchildren and doing more to help our Elders and Veterans. It is imperative that we put aside egos and personality conflicts while conducting business for our Osage people. To accomplish these goals, I will present ideas that will make our new government more effective and transparent such as implementing some form of accountability for every stream of revenue that comes into the Tribe (with the exception of the minerals estate) and exactly where it goes by utilizing both internal and external audits.”

“Yesterday our Nation faced one of the most difficult days in our history. Yesterday is over; today I am looking forward to continuing the positive relationships we have established as a Nation with our friends, in our communities, and with our business partners. I will continue the great work we are doing on our current projects such as the Enbridge pipeline project, our master campus plan, and our casino expansions, to name a few. I am also looking forward to working with Congress, our Judiciary, and our Minerals Council in whatever capacity I am needed to ensure the success of these projects and the unity of the Nation going forward.”