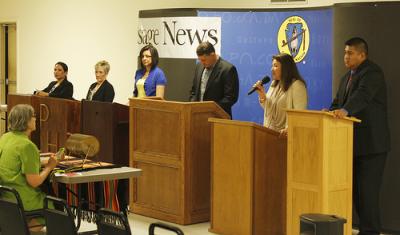 The Third Annual Osage News Political Debates are going to be featuring something a little bit different this year.

Instead of a question committee, all questions will be submitted from Osage tribal members and chosen at random by a volunteer from the League of Women Voters of Metropolitan Tulsa. The LWV has agreed to host all three debates. This is their third consecutive election year to assist the News staff.

The Primary Candidate Debates will be held on Saturday Feb. 1 at the Hominy Co-op building starting at 5 p.m. for those running for Executive Branch offices in this year's elections.

Eight candidates have filed for the Osage Nation’s first Primary Election, set for March 10. Debating first will be the Principal Chief candidates: Osage Congressman Geoffrey Standing Bear, Margo Gray and Tom Boone, all three candidates have confirmed they will be present.

Debating second will be the Assistant Principal Chief candidates: Osage Congressman Raymond Red Corn, Jimmy “Osage” Dailey, Amanda Proctor, Terry Mason Moore and Randolph Crawford. Not all candidates have confirmed yet. The News is waiting on confirmation from newly-appointed assistant chief Moore. Moore was appointed by Principal Chief Scott BigHorse to fill the vacant office after he was sworn in as chief after former Principal Chief John Red Eagle was removed from office.

The debates will be live streamed by the Osage Nation Communications team and any new information or updates on the debate will be posted regularly to the Osage News Twitter feed and Facebook page.

To submit a question or questions to the News staff please emailosagenews@osagetribe.org and include your first and last name, city and state. Anonymous or inappropriate questions will not be considered. The News is only accepting questions from Osage tribal members.

Submitted questions will be placed in a hopper at the debate. LWV volunteers will have full discretion to pass on repetitive questions. The deadline for submitting questions is Friday, Jan. 31 by 4:30 p.m.

The moderator will make sure that each candidate takes their turn in answering the question and will also make sure all candidates have a chance for their one-minute rebuttal. The moderator also reserves the right to shorten answer periods for the sake of time.

Candidates may choose to pass on a question and may pass when they are given one minute for rebuttal. Candidates will be offered time for rebuttals in the same order in which they responded to the question.

All answers will remain civil and candidates will refrain from personal attacks on another candidate. The moderator will reserve the right to disqualify any candidate who cannot adhere to this rule from further debate.

Questions will not be allowed from the audience, applause or any type of demonstration will not be allowed while the candidates are debating. The Osage Nation Police Department will be present at the debates. No visual aids, such as power points, may be used by a candidate.

Because the Osage News is non-partisan and does not support or oppose individual candidates, all political advertising (including brochures, bumper stickers, signs, buttons) and electioneering will not be allowed during the debate.