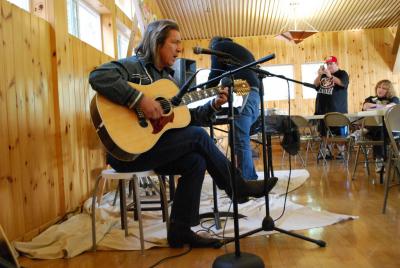 OAKLAND, Calif. – A sunny fall gathering for the Northern California Osage organization drew Osages living on the West Coast to the city’s Leona Lodge to hear presentations by Osage artists showcasing their works.

On Nov. 2, nearly 70 Osages and their families attended the annual gathering. Also attending were Osage Nation elected officials who traveled to the event from Oklahoma to meet and network with their fellow constituents.

A steering committee of West Coast Osages organizes the meetings held in spring and fall seasons. For this meeting, the committee invited all interested Osage artists to attend the meeting to discuss and showcase their work.

Fields said: “I am motivated in my work fundamentally by the search for freedom in all forms. I seek to create a contemporary terrain in the juxtaposition of my living memories. Playing with elements of space and time, I create a synthesis of symbolic objects floating and bending on the canvas at all angles; negating the horizon and the rule of linear experience.”

At the meeting, Fields conducted a live mural painting on canvas while fellow artists Cassity and Baldwin performed music for the attendees who watched Fields. His painting was later auctioned off among the attendees. Osage Congresswoman Shannon Edwards took the painting home.

To view images of Fields’ artwork and for more information, visit his website at www.yatikastarrfields.com.

Cassity performed acoustic folk rock songs and played her guitar during the mural painting performance by Fields. Cassity, who relocated to Oakland from Osage County where she grew up, said in her bio that her musical influences include Johnny Cash, Janis Joplin and Neil Young.

Cassity made a 2006 CD album titled Deeper and is working on a new album titled Songs from the Well. Cassity said she is planning an April 2014 performance in Pawhuska at the Osage Tribal Museum. Cassity is a also a recipient of a matching arts grant from the Osage Nation Foundation.

For more information on Cassity and her music, visit her Facebook page at: www.facebook.com/marcacassitymusic

Baldwin also performed music by singing, playing guitar and the harmonica. In his bio, Baldwin said he “has worked for dozens of tribes throughout the United States ... and a few years ago learned to play the guitar with the help and support of Bob Gemmell (Suquamish) and Vince Redhouse (Navajo). Growing up in a story telling culture, song writing about the Native experience has been a small passion for George. He plays and performs a few times each year for audiences that he believes will appreciate his message. He works at California State University Monterey Bay where he teaches behavioral science classes and an eclectic form of the martial arts.”

Murray is a writer and photographer from Puget Island, Wash. According to Murray’s bio, her “work has appeared or is forthcoming in Wild in the Willamette, The Lake Rises, The Salal Review, Oregon Humanities Magazineand National Public Radio. She has been awarded residencies at Hypatia-in-the-Woods, Playa and Jentel. Chapters from her novel in progress, The Heart Stays People, have won notice at Willamette Writers Conference in Portland, Ore., Oklahoma Writers Federation, The Nature of Words in Bend Ore., and Dylan Days in Hibbing, Minn. She offers creative writing workshops in tribal and community settings.”

BigEagle is a poet and fiction writer who’s written and published his works since 1975. According to his bio, BigEagle, “teaches creative writing with the California Poets in the Schools and teaches Native American Studies at the college level. He has been awarded Artist in Residence grants from the California Arts Council and the Headlands Center for the Arts (Marin, Calif.) and has served on various local, state, and national grant and policy review panels for many agencies including the California Arts Council, the National Endowment for the Arts, and the Annenberg Institute for School Reform. He is a founding Board Member of the American Indian Public Charter School in Oakland.”

The NCO steering committee is announcing its next meeting will be held March 15 in Oakland at the Executive Suites & Bayside Hotel.

Both hotels share a parking lot on the same property as the meeting space, according to NCO steering committee member Nanette Kelley. Discounted rates are available to those Osages interested in attending the March 15 meeting. The Bayside Inn is at (510) 356-2450 and the Executive Inn & Suites is at (510) 536-6633.

The meeting will also include a presentation by the ON Foundation.

For more information on the Northern California Osage group, visit its website at www.northerncaliforniaosage.org.