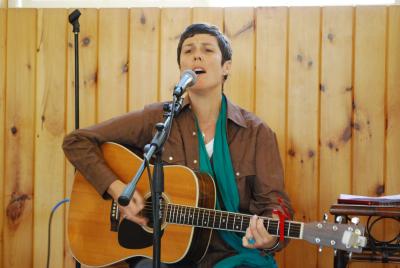 Marca Cassity, an Osage musician living in the Bay Area, is pursuing her dream of recording a studio album of original folk rock songs written by her.

Now in the works is an album titled Songs from the Well.

“The songs are inspired by my fascination of how we as people overcome hardship, and find resilience in our creative, powerful, and beautiful ways,” Cassity said of her album on the website indiegogo.com. “I grew up in rural Oklahoma where I first found my love of spirit and music, and have traveled around the world studying with traditional people, spiritual teachers and musicians from lots of amazing places. My roots and my journeys brought me to write Songs from the Wellfor upliftment and healing for myself and others.”

Today Cassity lives in Oakland, Calif., and works in trauma counseling for the Alameda County Crisis Support Services. She is a Ponca City High School graduate and earned her nursing degree from the University of Oklahoma. Her grandfather is former Osage Nation Congressman Mark Freeman.

Cassity created the indiegogo.com profile page to showcase her album project and also to seek monetary donations to help her finance the album recording with a professional music producer. She is also receiving help from the Osage Nation Foundation in the form of a matching grant.

In fall 2013, Cassity received an Osage Nation Foundation matching grant to help fund her album production and recording. She met with Foundation officials, spoke about her music endeavors and performed songs for them before getting the green light on her funding request.

Bill Webb, the ON Foundation executive director, said Cassity was awarded the grant in October for a maximum of $17,375 with the funding to assist in the recording and distribution of the album.

On Jan. 11, Cassity’s online fundraiser ended with success. She raised $20,050 at that time, but her indiegogo.com page is still active for people to view her biography and videos.

In one video posted to indiegogo.com, Cassity also recalled a personal event when a family member suffered a drug overdose and remained unconscious in the hospital. The outcome also motivated her to pursue the album project.

“Things were not good,” Cassity said. “So I went and visited her and I said to her: ‘well, you can either go on to the next world and be my angel or you can stay here … either one, it’s your choice.’ And so when she woke up out of the coma, she’s doing well now in her life, she said that she had a vision when she was sick. The vision was that she had gone down to a wellhouse, which is on my parents’ land where I grew up … And in the wellhouse she found a box of songs … She didn’t know what to do with them, so she got a call from John Lennon in the dream, in the vision, and he told her to tell me to record them”

“Wherever that story came from, it doesn’t really matter to me, just in love and paying homage to my family and their great resilience and humor and creativity, I’m calling this album Songs from the Well.”

Cassity said another requirement of her grant is to make the album available to the Osage public. “For example, I will be giving away 200 free downloads of Songs from the Well to Osage people. The thought of youngsters and elders and folks who would find upliftment and inspiration from this album in my tribe makes me so happy,” Cassity said.

Also being planned are performances when the album is completed. Cassity said she is planning an April performance at the Osage Tribal Museum in Pawhuska.

Click this link to learn more about Cassity at indiegogo.com:www.indiegogo.com/projects/marca-cassity-songs-from-the-well