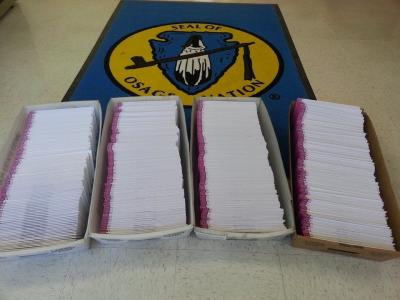 First round absentee ballots in the mail

The Osage Nation Election Office mailed off the first round of absentee ballots Jan. 29.

Absentee voters must ensure election office staff receives their ballots no later than Election Day to be eligible.

Due to construction of the Osage Nation Master Plan and unforeseen obstacles to parking, all voting will take place at the Wah-Zha-Zhi Cultural Center, located at 1499 W. Main Street in Pawhuska.

Election staff will count the ballots at the cultural center and announce the winners in front of the Osage Nation Congressional Chambers on election night. All candidate camps will be located on the Osage Campus grounds, per tradition, and shuttles will be available to shuttle voters to and from the polling place.

This is the Nation’s first Primary Election

The deadline to request an absentee ballot for the Primary Election is Feb. 10. All candidates have been certified and passed background checks by the Attorney General’s office.

This story was corrected on Feb. 3 to reflect the polling place for the early voting. The Osage News regrets the error.