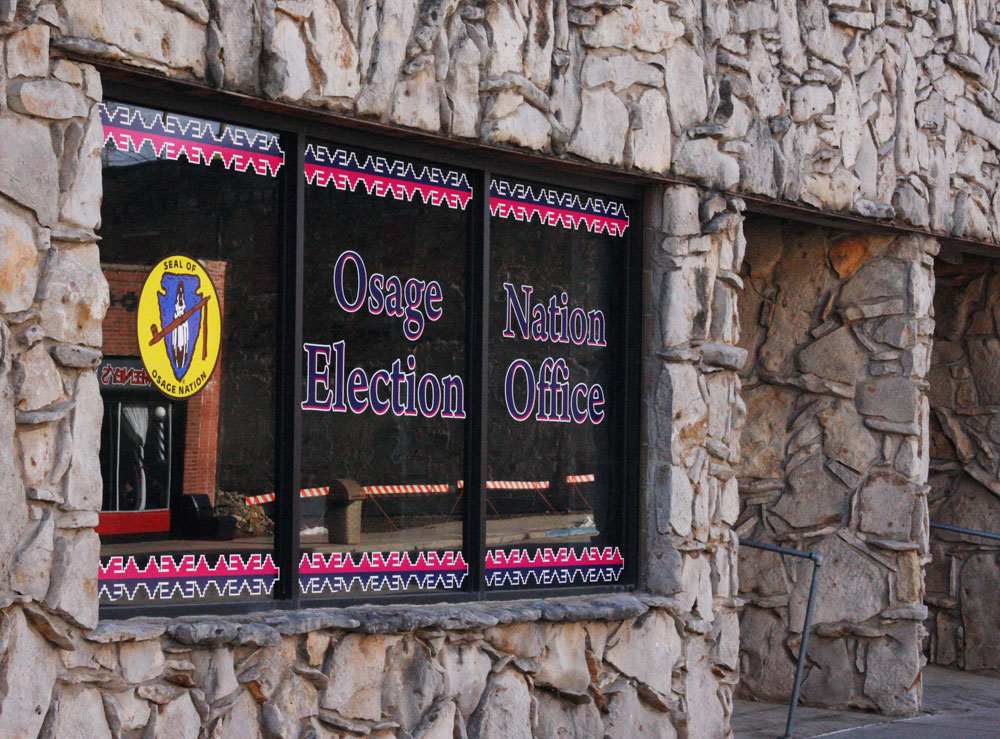 For the first time Osages can vote early before the official Election Day of an Osage election.

Election Day for the Primary Election is March 10 and voting will take place at the Wah-Zha-Zhi Cultural Center from 8 a.m. to 8 p.m. The cultural center is located at 1449 W. Main St. in Pawhuska.

To vote in person, Osage voters must be enrolled Osage Nation members who are 18 years of age or older on Election Day and must possess an ON membership card issued on or after Oct. 9, 2002, which bears the name of an ON Principal Chief.

In-person voters will be required to present a government-issued photo identification card such as a driver’s license, passport or military ID, for example. Also acceptable are Osage tribal member photo ID cards issued by the ON Tax Commission.

If an Osage voter does not have a photo ID card, he or she will be allowed to vote in-person if two election officials sign an affidavit affirming the voter’s identity.

Osages voting by absentee ballot must ensure their ballot is mailed back to Pawhuska by March 10 to be counted in that day’s vote. At 10 a.m. the day of the primary election, the election board will collect the absentee ballots from the Pawhuska Post Office, where they are being kept once arriving in the mail, to be counted along with the in-person ballots on primary election day.

Family: Married 13 years to Jessica Marie and one daughter, Rachel Marie. He has one brother, Daniel Boone, who is currently serving on the Third Osage Nation Congress. On his paternal side his great-grandfather was Joe Daniels, his grandmother was Cynthia Daniels Boone. His father is Tom Boone Sr.

On his maternal side his great-grandmother is Rosa Strikeaxe. His grandmother is the late Naomi Myers. His mother is Osage Minerals Councilwoman Cynthia Boone, who is serving her second term.

Work History: A small business owner for seven years. Possesses a class A, CDL (Commercial Driver’s License) for 20 years. Has never failed a pre-employment drug test or random test. One of the founding members of Youth Works, has been active with the organization for eight years.

Elected positions held: Elected to a five-year term on Pawhuska School Board, currently serves as board clerk.

Family: Mother of two sons and grandmother of seven grandchildren. Parents are the late Andrew and Margaret Gray; three brothers and three sisters. Grandparents were Clarence and Jennie Gray and her father was Wy-U-Hah-Kah. Her mother’s people on her maternal side was Grace Roan, who passed in her 20s and her mother was raised by Grandmother Nettie Luttrell. On mother’s side her grandfather was Henry Roan and He Ah-To-Moie and her grandfather was Wah-Tian-kah.

Work History: attorney and owner of Geoffrey M. Standing Bear Attorney at Law with offices in Pawhuska and Bartlesville. He previously worked as in-house general legal counsel for the Muscogee (Creek) Nation. He also worked as a managing attorney for the Economic Development Unit of the Navajo Nation Attorney General’s Office, which included a supervisory role of overseeing several attorneys, paralegals and office staff. Before law school, he worked as a grant writer, worked for a museum and a nonprofit foundation as well as various manual labor jobs. In addition to serving as a Congressman, he is also the chairperson of the Osage Nation Water Task Force and served as chair and vice-chairperson of various ON Congressional committees including Cultural and Commerce and Economic Development.

Family: Single. He is the son of Eugene and Mary Katherine Crawford. He was raised by Kathleen Scott Crawford.

Family: The daughter of Bennie Joe and Bonnie Mason of Fairfax. Her grandparents were Joseph C and Rose Moie-Kah-Moie Mason. She is the mother of four children, Jessica, Dillon, twins Erica and Elizabeth. She has one granddaughter. She is married to Ted Moore, Director of Operations for both the Chief John Red Eagle administration and the Chief Scott Bigorse administration.

Elected positions held: She was appointed to the 31st Osage Tribal Council in 2003 after councilwoman Camille Pangburn died. She was appointed the assistant principal chief on Jan. 30 by Chief BigHorse after Chief Red Eagle was removed from office. She was elected to the School Board for Woodland Public Schools.

Education: Juris Doctorate degree from the University of Tulsa (2005). She also received a certificate in Native American law from TU. She earned a bachelor of arts degree in anthropology from Harvard University (1999).

Family: Mother of three sons. Her mother, the late Karen (Crum) Proctor, is Osage and she is Cherokee on her father’s side.

Employment background: Attorney and president of the Shield Law Group, PLC in Jenks (Okla.), which focuses on Indian law and represents several Oklahoma Indian tribes and tribal entities. She is an attorney of record in the ongoing federal court case of Fletcher v. United States, which seeks to require the United States to account for the alienation of the Osage Mineral Estate from Osages to non-Osages. Previously worked as an attorney at Tulsa law firm Sneed Lang Herrold PC. Before practicing law, she worked as a tribal housing director for two tribes and has worked in the tribal housing industry for the past 15 years.

Education: Currently a student at Rogers State University in Bartlesville seeking a bachelor’s degree in business with an emphasis on management.

Employment background: Osage Nation Congressman elected to office in 2006; reelected in 2010. Prior to Congressional service, career was in construction trade since 1977. Work included carpentry, laborer and construction management starting in 1985; Started and ran his own remodeling company from 1995 to 2001.Returned to Pawhuska in 2003 where he purchased and renovated several downtown commercial buildings and residences in Pawhuska.

For more information on voting or the ON Election Office, call (877) 560-5286, email at electionoffice@osagetribe.org, or visit their website athttp://www.osagetribe.com/electionboard/.