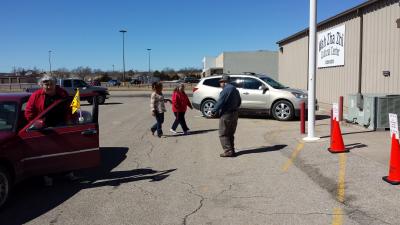 Morning turnout during the Osage Nation’s first ever primary election totaled 140 by the lunch hour, according to election worker staff at the Wahzhazhi Cultural Center.

The polling place remains open until 8 p.m. for Osages to vote in the primary election with three Principal Chief and five Assistant Principal Chief candidates listed on the ballot.

It’s unknown how many absentee ballots have been submitted, but three rectangular metal boxes were used to store the voter-marked absentee ballots once they were mailed back to the Pawhuska Post Office. These locked boxes contain slot holes for postal workers to insert the absentee ballot-marked envelopes upon arrival in Pawhuska.

ONPD, Rencountre and the Election Board also picked up the two boxes of absentee ballots stored in the Election Office vault during the same trip to the post office for the third one. ONPD officers transported the three boxes to the Cultural Center where the polling place is located. At the Cultural Center, the Nation’s contracted election company, TrueBallot Inc., will conduct the ballot counting.

When the counting is completed, the Election Office will announce the results in front of the Congressional Chambers, per tradition in past elections.

“Early voting worked out well, some voters told us they wouldn’t have been able to vote at all without early voting,” said Election Board vice chairwoman Shannon Lockett. Fellow board member Terry Hazen and Lockett said early voters included those who traveled from out of town including Texas, Missouri, Maryland and Fayetteville, Ark.

Primary Election Day kicked off with a prayer said by Principal Chief Scott BigHorse, who was among the first voters of the day.

Despite a slow morning turnout, the numbers increased as the lunch hour ticked closer. Voters Ross and Christina Mashunkashey were the 99th and 100th voters of the day and both were awarded T-shirts with “Vote!” printed in both English and Osage languages.

Christina Mashunkashey said the primary voting experience “didn’t seem as stressful” compared to past elections because of the small number of candidates running to choose from.

“We’re glad we did it,” Ross Mashunkashey said of voting. ‘We have Osage children to think of and we’re looking forward to the future.”

As of the afternoon hours, Principal Chief candidate Geoffrey Standing Bear is the only one who set up a camp at the government campus across the road from the Congressional Chambers. Per tradition, the ON government holds a lottery for camp spaces at the campus for election candidates to greet voters and their families on Election Day.

In related news, the Osage Tribal Museum will remain open until the election results are announced. Refreshments will be served. For more information, the museum can be reached at (918) 287-5441.