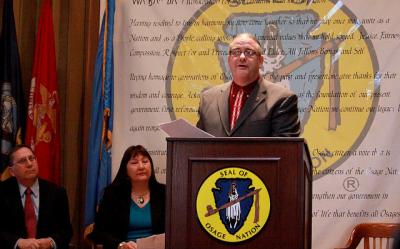 Osage Nation Principal Chief Scott BigHorse delivered the 2014 State of the Nation to update the citizenry on the government operations and progress made in 2013.

In prepared remarks BigHorse acknowledged several departments and their accomplishments in providing services to the Osage public during the annual state of the Nation address on March 11. This year’s address was given in the Congressional Chambers before a full audience comprised of Osage citizens, their family members, ON government employees and ON Congress members.

BigHorse shared highlights and accomplishments of the Nation’s government departments and entities, which include:

ON Senior Services, which provides weekday meals to Osage senior citizens, served 46,500 meals to those who congregate for weekday lunches served at the Title VI building in Pawhuska. Also, approximately 40,000 meals were delivered to homebound seniors throughout the Osage reservation. BigHorse calls the meal service “a powerful example of how we take care of our elders and we continue to do so.”

BigHorse said the ON Archives Department is digitizing documents so they will be stored in electronic format. “For years documents have been stored in various locations … the streaming of our documents not only leads to efficiency, but also overall security of our information.”

The ON Education Department awarded over 2,000 scholarships in the 2013 school year, which cost over $7 million budgeted for the service, BigHorse said. The scholarship program is available to all eligible Osage citizens, “to continue that higher education that is important for their endeavors and their futures that lie ahead for them.”

BigHorse also said the ON Historic Preservation Office celebrates that 575 cell towers have been processed through the Section 106 process, which brought $287,000 to the Nation. The HPO staff has also provided 1,100 hours of monitoring that will be reimbursed by Enbridge for the ongoing pipeline project, he said.

BigHorse also acknowledged the recent opening of the Osage Casino Hotel properties in Skiatook and Ponca City. Though he did not provide revenue numbers for the two properties, thus far, BigHorse said: “If current performance remains consistent through the summer months, we expect to completely pay off the debt by the end of the fiscal year Sept. 30 for both casinos.”

The ON Constituent Services Department, which handles Osage citizenry inquiries for services such as basic service information requests, burial assistance and the health benefit card, processed 4,606 requests for assistance in 2013, BigHorse said.  Of those 2013 requests, 3,418 were from Osage citizens, he said.

BigHorse said the ON Social Services Department and the Information Technologies department teamed up on a project that would allow SS workers to have a “tele-presence” in all 77 Oklahoma counties so those workers could appear via telephone/video conference in all county courthouses when cases involving Osage children are being heard.

The Social Services Department is also promoting the need for more Osage foster parents in Oklahoma and other states. “This recruitment has led to the first two Osage foster families in the state of California … I cannot tell you how important it is to have Osage foster parents, we have a number of children out there that do get sent out of our reservation, out of our jurisdictional boundaries and they end up in systems that are very, very hard to get them out of once they enter into those court systems,” BigHorse said.

Regarding economic development opportunities, BigHorse noted the partnership between the Nation and Enbridge to provide job and revenue opportunities for the Nation. The Nation’s Human Resources Department became a point of contact for the partnership and the ON Education Department won a U.S. Department of Labor award for the success of its 477 program that put 65 previously unemployed Osages to work qualifying 477 clients to work on the Enbridge pipeline, BigHorse said.

BigHorse said the Osage Nation Energy Services LLC Board worked to secure local company Arrow Pipeline as a contractor for the pipeline project. “The positive ripple effect for the project resulted in over 200 Osages and extended families of Osages going to work at jobs that are sustainable income,” he said.

The ON Human Resources Department issued over $1.2 million for employee merit pay last year to the Nation’s government employees, BigHorse said. The employees receive the merit pay awards each fall depending on the scores received on their yearly performance evaluations. He also noted: “The Congress, which I applaud, has given our employees (minimum) wage increases … which jumped from $7.50 an hour to $10 an hour.” Passed into Osage law in 2011, the Nation’s minimum wage increased from $10/ hour to $11.50/ hour starting with this fiscal year, which started Oct. 1.

The Nation’s diabetes program treated 758 diabetic patients “and folks, everywhere I go, I get compliments on our diabetic program and the good that it does because it’s a well-known fact that diabetes is striking our young ones now and it’s not an elderly disease any longer,” BigHorse said, adding 48 percent of the patients are considered “in-control” of managing their diabetes.

BigHorse also acknowledged the Nation’s inaugural employee fitness challenge held in 2013 to promote and encourage healthy lifestyles and weight-loss among the employees in a friendly multi-group competition. There were 120 participants and among those participants a reported total of 630 pounds were lost, BigHorse said.

The ON Foundation holds an annual charity golf tournament to raise money for the annual youth camps held each summer. The 2013 foundation golf tournament raised approximately $20,000 in net proceeds, BigHorse said, adding 140 youth participated in the 2013 camp activities with 70 percent of the attendees being Osage citizens.

BigHorse said the 2014 ON Foundation Golf Tournament is scheduled for May 12 at the Ponca City Country Club.

BigHorse acknowledged the Nation’s Information Technologies Department which worked on projects including an emergency notification system that will be embedded in the Nation’s new government website launched this month.

The Nation’s Election Office and IT department have also launched a new database for tracking incoming and outgoing Osage voter information, BigHorse said.

BigHorse also referred to the Nation’s $30 million permanent fund established via tribal law in 2013 by the Third ON Congress. The fund’s intent is to use the money “for providing direct services to the Nation,” he said applauding the Congress and the ON Treasury Department.

In 2013, BigHorse said the Nation provided $4.3 million for the health benefit card program and $461,000 for burial and hardship assistance programs, which are direct services available to Osage citizens.

The ON Roads Department worked on the 10.7-mile Chief Paul Pitts Road project between Wynona and Barnsdall, BigHorse said. Another ON road project is phase two of the 36th Street North in Tulsa (within the Osage County boundary) that is near completion, BigHorse said.

The ON Environmental and Natural Resources Department (ENR) is working with the U.S. Geological Survey on a hydrology study project, BigHorse said.

At the conclusion of his address, BigHorse recognized and honored Osage elders Christine No Ear and Otto Hamilton Jr., who were both present. “These two elders have always inspired me,” said BigHorse who presented them each with a Pendleton blanket.

BigHorse said honoring elders is important because, “our elders are our lifeline to our future and how we conduct ourselves, especially in our cultural ways … The month of June isn’t the only month of the year we have culture – culture continues around the clock every day for us Osage people.”

Hamilton and No Ear were this year’s selected honorees at the since-cancelled Sovereignty Day Powwow. The powwow was not held due to the passing of Osage elderMartha Ruth Davis, the mother of scheduled Head Man Dancer Fi Davis. Martha Ruth Davis was one of the remaining Osage full bloods from the Hominy District.