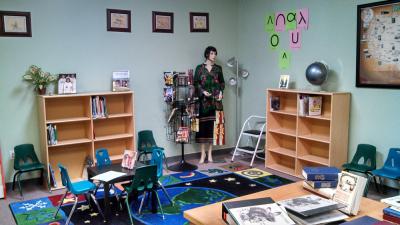 Now the library offers a resource center for those interested in genealogy, culture, history, and events. In September, the Osage Nation Library and Resource Center moved into a larger room to include a children’s section. This area has many beautiful books that focus on Osage and other tribal cultures for learners, ages 0 to 18. This year we plan to do more children’s programming to encourage reading and learning about the Osage culture. Join us Facebook for dates or check our website.

Also in September we purchased digital historical Pawhuska newspapers dating back from 1875 to 1926. Another latest edition for genealogical research is the Fold3 database, a sister site to Ancestry.com. At the library’s computers, you have free access to census rolls, the Native American Archives, and military records through this website.

Many new books have been added to the book collection since being started by Annette Gore in 1989 such as our latest book, Memoirs of a Captivity Among the Indians of North America by John Dunn Hunter, written in 1824. At a very young age, Hunter was a prisoner of the Kickapoo after they killed his family, but he was raised as a son in the Kansas tribe. His memoir details his life with the Kansas and Osage, while also describing the land, climate and vegetation of their lands. There are a variety of professionally written books and journals to select while visiting the library. We are also starting a collection of an array of maps.

The Osage Nation Library and Research Center is open Monday-Friday, 8 a.m. to 4:30 p.m. and appointments are available. We are located east of Alco, within the Wah-Zha-Zhi Cultural Center, 1449 W. Main, Pawhuska. You can also Like Us on Facebook: Wah-Zha-Zhi Cultural Center. If you have any questions or comments, contact us at (918) 287-5580 or email kauschwitz@osagetribe.org.