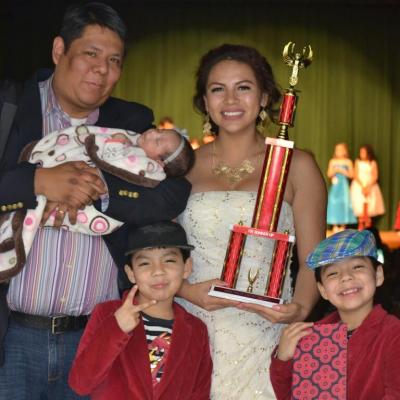 Josephine Horsechief, a 19-year-old native Pawhuskan, did not grow up in the pageant world.

“It was my first pageant ever,” she said. “I just got the letter, and decided to go for it.”

Horsechief was one of more than 150 participants in the Miss Teen Tulsa pageant held Feb. 15.

Horsechief was not the only novice. Most of the participants had never participated in a pageant before this one.

“I was very, very nervous, but it ended up being a lot of fun,” said Horsechief.

According to the Miss Teen Tulsa website, the 2014 winner was Verdigris High School senior Kelsie Fox. The winner was decided by judging criteria that is centered on personality, honesty, and generosity, among other character traits and characteristics. The contestants competed in three categories: casual wear competition, formal wear competition and personal interviews with the judges.

Although Horsechief didn’t take home the crown, she did win first runner-up for Most Photogenic, which landed her an invitation to participate in upcoming National Miss Teen competition Orlando, Fla., in 2015.

“Next year, in Orlando, there are many different pageants – each (of which) award the contestants with amazing scholarship money,” said Horsechief.

According to the website, participants who make it to Orlando will compete for more than $30,000 in prizes, including cash scholarships. The winner of National Miss Teen will receive a $40,000 scholarship and a 2015 sports car.

“I’m taking a year off from school and would like to get back,” said Horsechief. “The scholarship money will help me get there faster.”

The pageants require registration fees, travel and other expenses. Horsechief’s father, Otto Hamilton, is helping her with funding.

“We didn’t have a lot of time after we found out she was going to be in the pageant, but we got some good feedback from a few businesses in town,” said Hamilton. “Everybody was happy to help out, which was nice.”

As for the actual pageant, Hamilton found the experience surreal.

“Jojo (Horsechief) was kind of a tomboy growing up,” said Hamilton. “She didn’t like dressing up or even wearing dresses. So, her competing in a pageant was pretty unexpected. But, of course, we wanted to support her with her endeavor, and she made my wife and I very proud.”

“We all compete in different dance competition categories at powwows, so it was somewhat similar to that,” Hamilton added.

When asked if she would do it again, Horsechief was quick to respond, “Yes! It has been a great experience.”

As for going to Orlando, the family is waiting to hear more pageant details before they work on fundraising and/or seek sponsorships.

For any other young women hoping to get into the pageant world, Horsechief said they should go for it. “It’s hard at first, but once you get one pageant done, it’ll be easy.”

To find out more details about the Miss Teen Tulsa pageant, go to their website at www.2014missteentulsa.com.