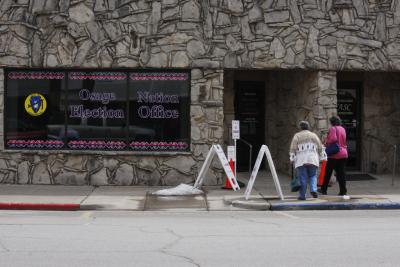 At the close of business April 3, thirteen candidates had filed for a seat on the Third Osage Minerals Council. And more are expected to file by the April 7 deadline.

"We think there might be about ten more filing," said Trey Rulo, Assistant Supervisor at the Osage Election Office. "I'd say there may be around 20 (candidates) all together."

Candidates are required to complete a 25-signature petition in order to qualify to run. Petitions must be completed and turned in by April 7 at 5 p.m. Each petition requires 25 different signatures from eligible Osage Mineral Estate shareholders.

"This is just how it's always been done," said incumbent candidate, Cynthia Boone about the petitions. "We have to have 25 headright owners who agree they want us to run."

Eligibility to run also requires candidates be enrolled members of the Osage Nation, receive royalty income, and be 18 years of age or older on Election Day. The same guidelines apply for voters.

The 13 candidates for the Third OMC as of April 3 are:

Different than the Osage Nation General Election, the OMC election voting system is not a one vote per person.

"Each voter shall be entitled to cast one ballot and each ballot shall have exactly the same value as the voter's headright interest shown on the last quarterly annuity roll," according to the notice.

"Some (shareholders) have several headrights and some just have a small fraction of a headright," said Andrew Yates, OMC Chair, about the royalty amounts that translate into how much of a vote eligible shareholders have.

Yates also said there may be as many as 4,500 eligible voters who own the varying amounts of the original 2,229 headrights.

The Bureau of Indian Affairs provides the eligible voter list and royalty amounts to the Election Supervisor. True Ballot, LLC, has been contracted by the OMC to administer the on-site election and ballot counting.

Election Day is Monday, June 2 from 8 a.m. to 8 p.m. at the OMC Council Chambers in Pawhuska. All applications for absentee ballots must be received by the Election Office, Friday, May 23, before 5 p.m. or picked up at the Election Office by the eligible voter any time prior to the opening of the poll at 8 a.m., June 2. The deadline for receiving absentee ballots is 8 a.m. Election Day.

For more information contact Faren Revard at (918) 287-5288, or MineralElection@osagenation-nsn.gov.