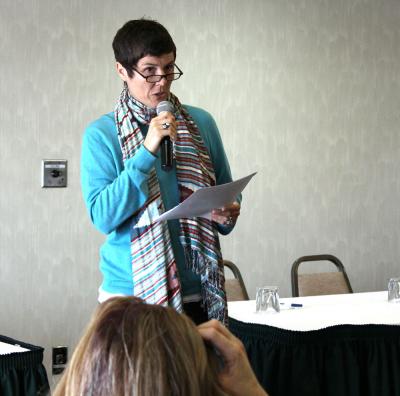 Osage musician Marca Cassity is holding a CD release party for her new folk rock music album recorded with the help from online donations and a matching grant from the Osage Nation Foundation.

On April 16 at 11 a.m., Cassity will offer a free acoustic solo performance of her new album “Songs from the Well” at the Osage Tribal Museum in Pawhuska. According to a news release, Cassity’s album features 11 folk rock spirit songs “that speak to overcoming hardship through resilience in connection to nature, humor, love, compassion, spirituality and heritage.”

The ON Foundation awarded Cassity, an Oakland, Calif. resident, a matching grant last fall and Cassity sought online donations as she promoted her recording project to pay for the recording sessions at Fantasy Studios in nearby Berkeley. Cassity met her goal and raised over $20,000 earlier this year.

Cassity, a granddaughter of former Osage Nation Congressman Mark Freeman, said “this theme of appreciation of heritage is a very important topic to me as his granddaughter and also as an artist. This is something I also aspire to do – is to call people more strongly to their heritage and I feel when I express myself as a musician, which is one of the ways I express myself, that I’m being a responsible Osage and I believe art is very important.”

On March 15, Cassity shared a brief presentation on her recording project at the Northern California Osage spring gathering in Oakland. She said her album is near completion with one more day of studio mixing needed.

Cassity, a Ponca City High School and University of Oklahoma graduate, said she is planning to relocate back to Oklahoma where she plans to share more of her music with Indian Country. When she’s not playing music or singing, Cassity works as a therapist and holds a nursing degree.

When Cassity moved to Northern California 10 years ago, she met several Osages and other Native Americans living in the Bay Area. One theme she noticed in meeting others is “a deep desire for belonging,” which is part of her inspiration for making music.

“Being a therapist, I really have learned about working with historical trauma in Native American people, assimilation, genocide,” Cassity said. “In working with trauma and historical trauma, there’s a deep desire for belonging and to me it’s one of the deepest psychological needs that we have as humans… When you’re displaced by the powers that be and constantly having to fight for your rights to exist, it causes a lot of stress and that stress can turn family members against each other.”

“This is a time when families must reach for resilience and find their strengths and gifts and talents and find a way to get along, I think this is true for our Osage families as well,” Cassity said. “The theme of my new album is all of this rolls into my arts, my expression is overcoming hardship and finding resilience in healing through nature, love, humor, compassion, strength and heritage.”

“I had the idea of bringing Osage dance bells to the song because I believe the sound of the bells and the drum and In-Lon-Schka are healing and powerful,” Cassity said.

In reaching out to the Osage public, Cassity said she plans to release 200 downloadable copies of “Songs from the Well” to the first 200 Osages who contact her “at a date to be announced” during this spring.

According to the ON Foundation, Cassity was awarded a matching grant in October 2013 for a maximum of $17,375 with the funding to assist in the recording and distribution of the album. Cassity created an indiegogo.com website page to promote her album and to collect matching grant donations from the public. On Jan. 11, Cassity’s online fundraiser ended with $20,050 raised by online supporters.

Cassity said a CD release party is also planned for the Bay Area on April 26 at the Subterranean Arthouse in Berkeley. For more information on this event, visit the venue website at www.subterraneanarthouse.org.