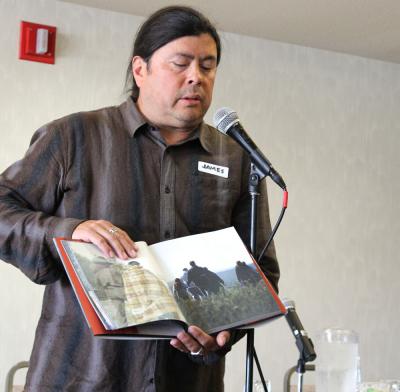 An Oklahoma City area photographer compiled scores of images he’s taken of Osages in everyday life and celebrating their culture and created a photo book.

Lambertus said he began taking photos of Osages and Osage-related events when the reformed government started its launch in 2006.

At the March 15 Northern California Osage meeting in Oakland, Lambertus gave a brief presentation of his book.

Lambertus, who is also publisher of Dreamcatcher magazine in Norman, expressed thanks for the grant funding opportunity to the Foundation, “and the Osage for allowing me to be a friend – I’m Hopi. And I, through (ON Congresswoman) Shannon Edwards, became familiar with the Osages starting with the First Congress, their first session.”

Lambertus said other small projects through the Nation like a calendar under the Chief Jim Gray administration culminated in more photo opportunities that led to the photo book.

“It’s a visual book about Osage life that I’ve seen ... Things I was either at or aware of,” Lambertus said in describing his book. “The (book’s) opening spreads talk about Osage pre-history and legends and stories, the origin of the tribe. This was from a presentation by Dr. Andrea Hunter (former ON Historic Preservation Office director) juxtaposed with an image from the ballet (Wahzhazhe: An Osage Ballet).”

Launched in 2012, the Wazhazhe ballet production also tells a chronological story of the Osage tribe. The production also received grant assistance from the ON Foundation.

Lambertus said he also attended Osage group trips to Fort Leonard Wood, Mo., in 2012 where he shot images of rock carvings believed to belong to Osage ancestors. He also took photos during the annual Cultural Walk, which recreates the Osage ancestors’ footsteps from the Kansas state line into present-day Osage County.

“It just spoke to me – people on journeys,” Lambertus said of the trip images. “I grew up in Oklahoma City totally unaware of the beauty that was in Osage County and I get a feel-good vibe there too, I like being there.”

Mindful of the “no photography” rule during the annual June In-Lon-Schka dances, Lambertus said he did not include many photos taken during the dances and said, “I didn’t want to intrude on that particular part of your culture but I did want to acknowledge it.”

Edwards, also present at the NCO meeting, touted the Foundation grant opportunities because: “to me, the projects that we’ve seen, those could’ve never happened without this matching grant and the support of all of us in matching (those funds).

“For example with the book, my father (Osage) and mother (Chickasaw) matched a considerable amount of that grant so that book could be produced,” Edwards said. “I felt it was really important for those images that had been collected over the course of seven years to be published for everyone to share and they’re about all of us.”

ON Foundation executive director Bill Webb said Lambertus received a $25,000 arts matching grant in August 2012. He also noted Lambertus provided a professional photographer to take pictures at the Foundation’s 2012 fundraiser Christmas party of families in attendance at the event.

Lambertus said he is finalizing a sales event to discuss and sell the “Osage Homecoming” photo book in Pawhuska.

For more information on the ON Foundation and matching grant opportunities, visit its website atwww.osagefoundation.org.