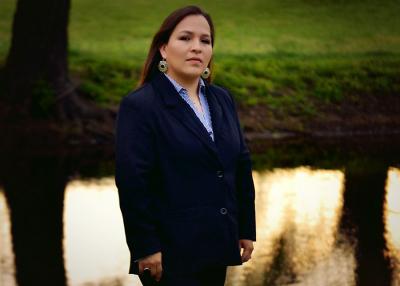 W. Jacque Jones has announced her candidacy for the Fourth Osage Nation Congress

If you elect me as your Congress person I will be a committed public servant to Osage Constituents. For 10 years, I have dedicated my career to making life better for all Osages. My love for service began at an early age with lessons learned from my parents, Vann and Mary Bighorse. Their example led me to know without a doubt that serving others is the highest calling.

I began serving as the Osage Nation Breast Feeding Coordinator for the Osage Nation WIC in 2004, then working my way up to an appointed executive staff member as an Administrative Assistant for the Executive Office of the Principal Chiefs in 2006. Since 2007 I have served as the Director of the Osage Nation Constituent Services Office providing Burial Assistance, Regional Gathering Assistance, Donation Assistance, Health Limited Benefit, processing complaints, and documenting needs of constituents of services the Osage Nation does not offer.

I have kept constituent needs at the forefront of Executive and Legislative conversation for all Osages no matter where they live.

While serving as the Director of the Osage Nation Constituent Services Office, I have been known as a common sense individual with creative problem solving and strategic thinking always having Osages in mind, and a proven willingness to work with the Executive Office of the Principal Chiefs and Osage Nation Congress to help fellow Osages. In fact, those efforts earned me recognition from the National Center for American Enterprise Development in 2010 acknowledging:

My ability to lead by example, to find workable solutions for the all Osages I believe has prepared me to serve as your Osage Nation Congressional representative. Whether it’s fighting for education, sound fiscal policy, employee rights, and more benefits for our elders, and safety of our schoolchildren, I have had the opportunity to time and time again demonstrate a devotion to service to Osage people. I promise if you vote for me I will place the needs of all Osages over politics; I am proud to be Osage and remain close to my roots and the community which formed my strong love for the Osage Nation.

I encourage you to cast your vote June 2nd and I am humbly asking for you to: Vote for W. Jacque Jones for Osage Nation Congress!