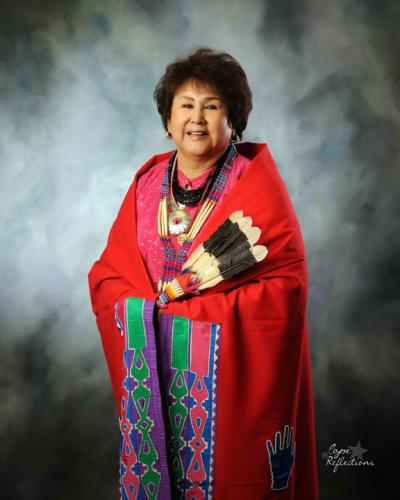 I am Beverly Rose Wamego Brownfield from the Grayhorse District of the Wazhazhe. I am proud to announce my candidacy for the 2014 Osage Nation Congress. My grandparents were Amos Osage and Eliza Buffalo Osage Bigheart. My parents were Mary Osage Green and Lewis A. Wamego. I am of the Governor Joe Band of PahSueLee and Eagle Clan.

After graduation from Pittman Business College in Dallas, Texas I worked for Conoco Oil Company for 24 years. My work experience as Sr. Title Assistant in Real Property Administration included oversight of petroleum legal documentation along with legal oil and gas contracts and accounting for Bulk Plants divisions. In 1996, after retirement, I became a board member of the Osage Nation Tax Commission and following eight years of service became the Osage Nation Tax Chairman until present.

Some issues I would like to address for our Osage people include greater communications within all of the branches of our Government. Communication includes listening to others, respecting others opinions, and using some common sense while debating issues.

I would like to see continuation of our Cultural education programs and awareness. We hear from the past that our Osage people have always been future oriented. Our language departments success is only one example of keeping and educating our children needs to pass on the traditions of our Legacy.

Healthcare for or Nation needs improvements across the board. Our elders need adequate and timely health care providers along with the changes in our national healthcare laws.

I would like to see resources, that the tribe already has in place, being used to further or business opportunities. We have seen through past mistakes that our LLC needs a complete overhaul, but using existing lands that the tribe has purchased or received, by investing in our backyard, would be one of those examples of common sense.

This Osage Nation Government election has made me ever aware of the need for Native people involvement with the election process. I would like to extend the knowledge and need for everyone of our Nations Tribes to vote in their own elections. I would also like to express the need for Indian people to vote in State and National elections, which we are seeing right now with the State of Oklahoma trying to obtain “oversight” of our trusts. Natives hold the power to make a difference if we would just get out and VOTE!

I would appreciate your vote on June 2nd.