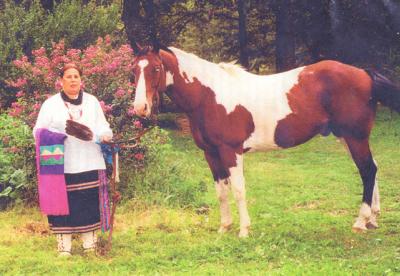 I was born in Los Angeles, CA. My family returned to Pawhuska, OK when I was about 18 months old to live on my grandmother’s original allotted land. We still live on this property. My husband and I will celebrate 45 years of marriage this year. He is on the Grayhorse committee. We raised two sons. Tom Jr. was elected to a 5 year term on the Pawhuska School Board. Daniel was elected to a 4 year term on the Osage Nation Congress. I received my Indian name from Margaret Shunkamolah. My family is culturally affiliated. I retired from the Indian Health Service, the federal government, after 27 years of dedicated service ad had a strong work ethic. I administered a comprehensive Contract Health Service program managing millions of federal dollars over the years and was considered an expert in my field.

My primary interest is to protect the minerals trust and our assets. I believe in accountability, transparency, due diligence and am a strong believer in the 1906 Act. The minerals estate brings in more than $65,000,000 in revenue a year and is held in trust for the headright owners. I am not in favor of having the Osage Nation taking over any function of any of the departments of the Bureau of Indian Affairs. This is called compacting. I don’t believe the Osage Nation needs to be involved in our affairs.

I was a member of the Osage Trust Team, who negotiated the settlement of the Highest Posted Price lawsuit that we enjoyed in December 2012. At the end of June, I will have 8 years experience as your elected official of the Osage Minerals Council (OMC). I believe the OMC is independent and can promulgate its own rules. As policy chairman, I have tried to develop our policies as an independent agency.

I am the only woman on the current Osage Minerals Council. I am an independent thinker. My voting record supports not only this but also that I am on the side of the headright owner. I sponsored a number of resolutions. Some examples are: Resolution #2-11 to remove the Osage Nation archaeologist from the OMC lease approval process. All 8 members voted “yes”. Resolution #2-53, the OMC has control of our 3 accounts. The only “no” vote was from Councilman Abbott. Resolution #2-101 to prohibit any entity of the Osage Nation from using the minerals estate for a financial commitment. It passed. Resolution #2-92 to have our general staff attorney to devise a plan to safeguard our bank accounts and make us independent according to our vote of 9-21-11. This failed. Those opposed were Councilmen Crum, Yates, Core, Redeagle and Abbott. Those in favor were Councilmen Bear, Whitehorn and me. At the OMC meeting 4-16-14, we passed a resolution to start taking over our accounts from the Osage Nation. I’ve been consistent with my voting. I can’t say that for everyone.

My son, Congressman Daniel Boone and I publish a newsletter called “Boone Bulletin” as a way to keep in touch with our constituents. We do this at our own expense. If you want to receive a copy, you can e-mail your address to: tom@cowboy.net or you can call (918) 698-3314 and we will mail you a copy.

I am retired, in good health and do not work anywhere else. I have made your concerns my primary focus without interference by any other entity. During the last election, I was the only person re-elected and I have received the most votes. I thank you voters for that. I want to continue to put your concerns first by having the opportunity to serve you again. I am asking for your vote on June 2. I’m #13 on the ballot. If you can’t be in Pawhuska to vote in person, you can obtain an absentee ballot by calling the Osage Minerals Election Office at (918) 287-5288.