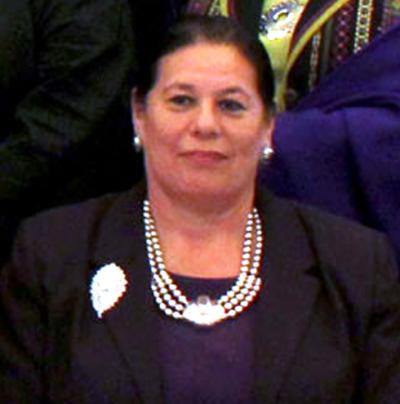 Minerals Council resolution to ban Cynthia Boone up in the air

The Third Osage Minerals Council has taken their oaths of office but a resolution passed June 18 to ban Councilwoman Cynthia Boone by the Second OMC remains. However, like Osage Congressional resolutions, the minerals council resolution passed does not have the authority of law to keep Boone out.

“We do not enforce resolutions and policies of that nature but we do enforce criminal law,” said Osage Nation Police Chief Nick Williams. “This isn’t the first time we’ve had to explain this. Resolutions do not enforce us to act upon it, by [Osage Nation] law.”

The resolution passed describes Boone as hostile and abusive when it comes to the council staff. Former OMC Chairman Andrew Yates said the resolution aims to prevent any further bullying behavior from Boone by banning her from the council office except during council meetings, committee meetings or when absolutely necessary.

Yates, Crum and Boone were all re-elected to the third council.

“The council had no right to pass that resolution, their actions will adversely affect my fiduciary responsibility to the headright owners, they can’t keep me from going to the office,” Boone said in June. “I’m the only woman on this [Second] council and I think the actions taken out against me is harassment.”

At the heart of the dispute is OMC staff member Dena Rackliff. Since January of 2013, five police reports mention Rackliff and Boone.

“[Boone’s] been harassing Dena Rackliff,” said Yates. “Whenever she would have a court date Cynthia [Boone] would show up. [Rackliff’s] lawyer would say, she is being stalked by Cynthia. Cynthia shows up randomly in town wherever she is, according to Dena.”

Rackliff said she could not comment for this article.

Yates said Boone’s harassment of the office staff has been going on for four years and maybe longer. He said in 2011 he became aware of Boone’s treatment toward the staff after Councilman Crum was elected chairman. Crum told the rest of the council what he was hearing.

“[Boone's] disrespectful to the staff, mistreating them, speaking rude. She has threatened jobs, threatened to fire them. She would get in their face and lean over in a threatening manner and tell them she was an elected official,” Yates said, but also acknowledged that he had not personally seen this behavior, staff members told him of Boone’s behavior. “I think Sonny [Abbott] said it best: respect is earned.”

As a result of repeated complaints from the minerals staff and at the urging of an ONPD officer, the council adopted an Anti-Hostile Workplace policy to protect the staff, Yates said. The council created an Office Manager and Assistant Office Manager to interact with the staff naming Councilmen Core and Red Eagle to the positions.

“I’ve fought this for a year, and I’ve watched it for four,” Yates said. “We were trying to get this in place until the new council comes on. I was trying to clean everything up so that when they came in they wouldn’t have to deal with it.”

Boone hired Jack Elsey, a Tahlequah-based attorney to fight what she is calling “harassment.” She continues to go to the minerals council office but because she cannot interact with the staff she does her work without assistance, she said.

Beginning in 2013, the police reports detail a rise of domestic abuse between Rackliff and her child’s father Maurice Kent, an Osage tribal member. Kent is a registered sex offender and has repeatedly physically abused Rackliff, according to police reports. One report said Rackliff was nine months pregnant at the time of one altercation. Rackliff obtained a protective order from Kent in July of 2013. A total of 12 police reports involve Rackliff since January 2013, and five involve Boone.

“There are some people in the office that feel they are being endangered,” Boone said, referring to Rackliff and Kent's relationship.

On Jan. 10, 2014, Rackliff was arrested at the minerals council chambers on a warrant for missing a court date with Kent, according to a police report.

On Feb. 26, Boone went to the ONPD station with Rackliff’s phone records from her minerals council issued cell phone. “Boone advised she observed several calls placed from this phone to a [number] which belongs to a Maurice Kent,” according to the police report. The report detailed the many calls made between Rackliff and Kent and ONPD Officer Mike Anderson said it was his opinion Rackliff had blatant disregard for the protective order.

On Feb. 27, Rackliff called the ONPD and said Boone was harassing her and had been for an extended period of time. Rackliff also said she had reported the incidents to the ON Human Resources Department and the ON Attorney General, whom she said told her to make a police report and that she wanted a restraining order against Boone.

“I went into the office one day and I was asking Dena some questions about some information I had in my hand and she said I was making her uncomfortable. I said what is making you uncomfortable and she started pounding on the wall yelling for Melvin Core,” Boone said. “The next thing I know she filed a petition in the tribal court for a protective order against me, she had written up an incident report and made several statements that were a lie ... The same day I went to the court about the protective order was the same day she was arrested for perjury.”

On Feb. 28, Rackliff is arrested for perjury after being caught on a Kum & Go camera kissing Kent in violation of her protective order, according to police reports. Her minerals council cell phone is seized as evidence.

On March 11, Rackliff is assaulted by Kent, in Kent’s residence.

On June 13, Councilman Melvin Core calls ONPD after Boone and Rackliff begin arguing in the minerals council office. According to the police report, when Officer Dan Hively arrived Boone began to tell her side of the story and, “Entry was made into the office by Dena Rackliff who was evidently the source of Ms. Boones problem.” Hively said in his report that he allowed Boone to speak first, in which Rackliff began making “disruptive noises” and “disrespectful sounds.” Hively said he rounded on Rackliff and the situation verbally escalated. He allowed both women to tell their side of the issue and said he later spoke to Core and Yates about a possible resolution to the problem.

Boone said Rackliff was not penalized for being “disrespectful” to her.

“I was recently elected to my third consecutive term and that should say a lot to my associates. Because I was elected to come back and handle my elected duties and I was honored and I was humbled to be elected for a third time and I will continue to serve the shareholders,” Boone said. “I’m not going to let these men bully me around because I think this whole thing was set up just to attack me. And why they waited till the last two weeks of our term to bring all this out, I don’t know.”