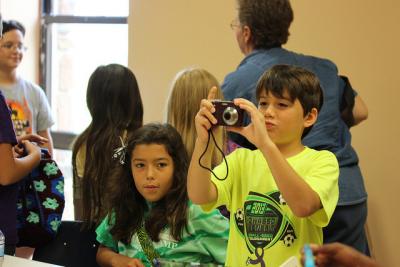 Seven camps have been set up for the local youth to participate in during the summer months.

The Osage Foundation is hosting the third annual summer youth camps to provide Osage children and local youth a chance to participate in camps to teach them skills and to teach fundamentals within the seven camps offered, according to the Foundation’s website.

“This is the third year for the Youth Camps and the largest year to date with 500 participating due to a partnership with the local Boys and Girls club. Last year there were 180 participants, so this is by far the largest group and our best turn out,” said Bill Webb, executive director for the Foundation.

The Summer Youth Basketball Camp was held the week of June 18-June 20 at the Osage Nation Boys and Girls Club in Pawhuska.

The camp participants were taught the fundamentals of basketball and were taught drills to help the campers become better basketball players. Skills taught included learning ball-handling skills, as well as free throws and other activities.

Participants were divided into age groups and skill levels.

One of the most popular camps, the Summer Youth Photography Camp, hosted by Sherry Stinson, was held at the Boys and Girls Club as well. The camp participants were given the opportunity to learn the fundamentals of how to use a digital camera, good photo angles, photo editing and photo positioning.

Participants were required to bring their own digital camera to class. The class, taught in two different age groups, also gave participants a chance to craft photo frames and make scrapbook pages.

“These camps are incredibly fun to teach and I’ve been honored to do so the past three years,” Stinson said. “Seeing the world through the eyes of a child is both refreshing and inspiring. I can’t wait to see what the future holds for these bright, young children.”

The class will all get a printed photo book with biographies written by the participants with their work. The camp was held June 23-June 26

Golf camp will be held at First Tee of Tulsa at the Mohawk Golf Course on July 14-July 15. The camp is coordinated by Leslie Core-Drevecky’ (Osage) the staff and instructors are motivated to teach each participant the game of golf, according to the Foundation’s website.

Transportation is not provided to the participants and parents will need to find a way to get them to and from camp daily.

Dance Camp is for student’s ages six to eight. Participants will receive education in dance history as well as technique and chorography in jazz, hip-hop and ballet.

The participants will receive strengthening training and conditioning during the dance class, according to the Foundation’s website.

Dance classes will be held at the Boys and Girls clubs of all three districts.

Archery camp will teach physical education through target archery shooting; it will cover history, safety and techniques, equipment and mental concentration and self-improvement, according to the Foundation’s website.

The archery classes will be held at the Boys and Girls Clubs of the three districts.

The camp will be picking bones, fossils and other ancient remains during the prehistoric adventure, according to the Foundation’s website. “The camp will take the participants on a journey back in time starting with the Cambrian Explosion and looking at creatures of the Cretaceous Period.”

The participants will examine a mock bison kill site for signs of ancient humans, according to the Foundation’s website. Transportation to the camp is not provided and parents will need to find a way to get their child to and from camp daily.

For more information visit www.osagefoundation.org. To see more photos from the camps, visit the Osage News Flickr page at www.flickr.com/photos/osagenews/