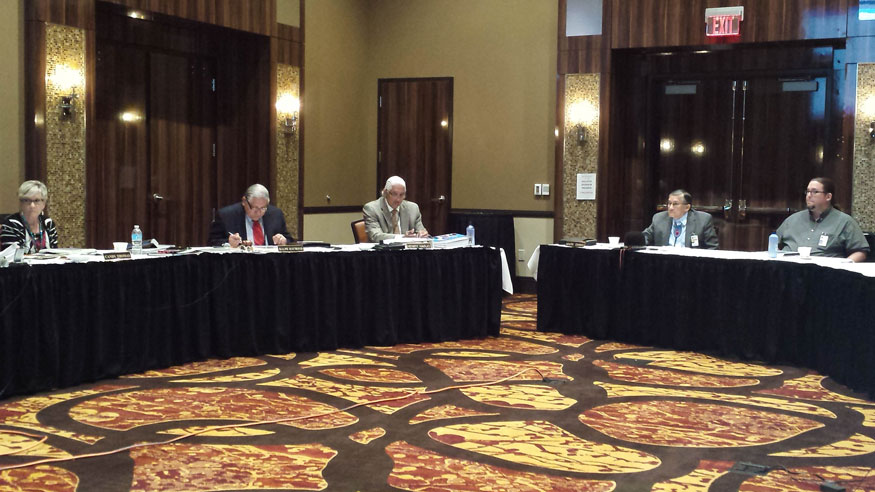 PONCA CITY, Okla. – One week after his swearing-in, Principal Chief Geoffrey Standing Bear made his first board appointment to the Nation’s Gaming Enterprise Board, which will be subject to Congressional confirmation during the 2014 Tzi-Zho Session in September.

On July 9, Standing Bear notified the Fourth ON Congress via executive message that he appointed John “Trey” Goldesberry III to the gaming board. Goldesberry is a former Osage Casinos human resources worker who currently works for Tulsa-based ONEOK.

Goldesberry is now serving as an interim board member pending ON Congressional confirmation during the 24-day regular Tzi-Zho Session starting Sept. 2. An ON Judicial Branch officer will swear him in as a board member on Aug. 7 at the tribal courthouse in Pawhuska.

Per the 2006 Osage Nation Constitution, all board and commission appointments by the Principal Chief must be confirmed by the ON Congress to continue serving past the interim appointment period.

In a statement regarding his appointment pick, Standing Bear said: “Trey Goldesberry is very knowledgeable on the rules and regulations of gaming. Before working in the private sector he was employed with the Osage Casino HR Department. There is no one better qualified to provide oversight on gaming operations for fair opportunity for our Osage people in employment and contracting.”

Goldesberry’s appointment comes after former gaming board member and chairman Aaron Bighorse’s term expired and Chief Standing Bear did not reappoint him to the board.

Goldesberry expressed gratefulness for joining the board at its July 16 meeting in Ponca City. Pending his swearing-in, Goldesberry said he would abstain from voting on board business during meetings.

According to his resume, Goldesberry started working in March for ONEOK as a human resources consultant and maintenance provider for the company information systems including payroll and online learning management and reporting segments of its HR software. Before that, Goldesberry worked nine years for the Osage Casino and predecessor Osage Million Dollar Elm Casinos HR department in several capacities including information systems specialist.

Also at the July 16 meeting, board member Ralph Haymond said he would be serving as interim chairman until the board votes on new officers including vice chairperson and secretary in August.

Haymond acknowledged Bighorse for serving on the board and said he and remaining board members Henry Harjo, Candy Thomas and Mark Simms would continue its work noting “we also swore an oath to do what’s best for the Osage Nation” and “our best for the Osage people – young and old.”

The change in board members comes as the Nation’s government branches also change with other new Osage officials who also took oaths during the July inauguration ceremonies. The changes also come as Osage Casino officials announce they are working on expansion plans for the Tulsa Osage Casino.

Congresswoman Alice Buffalohead attended the meeting and announced legislation is in the works seeking an annual $50 million distribution in gaming revenue to fund the ON government operations - $10 million more than what the Nation currently receives for funding the three-branch government. Over three years ago, an annual $40 million distribution deal was reached to fund the government operations with that amount while the Osage Casino management retained the remainder of the casino profits focusing on the casino expansion projects – subject to actions by the gaming board. Thus far, Ponca City and Skiatook have received casino/ hotel properties. Plans for the Tulsa casino expansion are in conception phase and remain an executive session item during gaming board meetings.

The tribal gaming revenue is used to support government departments and programs, which do not receive funding from federal, state or other grant money sources. In addition to gaming revenue, the tribe also receives money from the Tax Commission for licensing fees and vehicle tag sales.

Buffalohead said the proposed legislation in the works would seek a total of $50 million to be distributed to the Nation’s government annually. She said $5 million of the proposed distribution would be earmarked for the loan paying for the campus master plan now under construction.

The 2014 Tzi-Zho Session starts its 24-day run on Sept. 2 with the focus on budget matters as the Congress must pass governmental budgets for the 2015 fiscal year beginning Oct. 1.