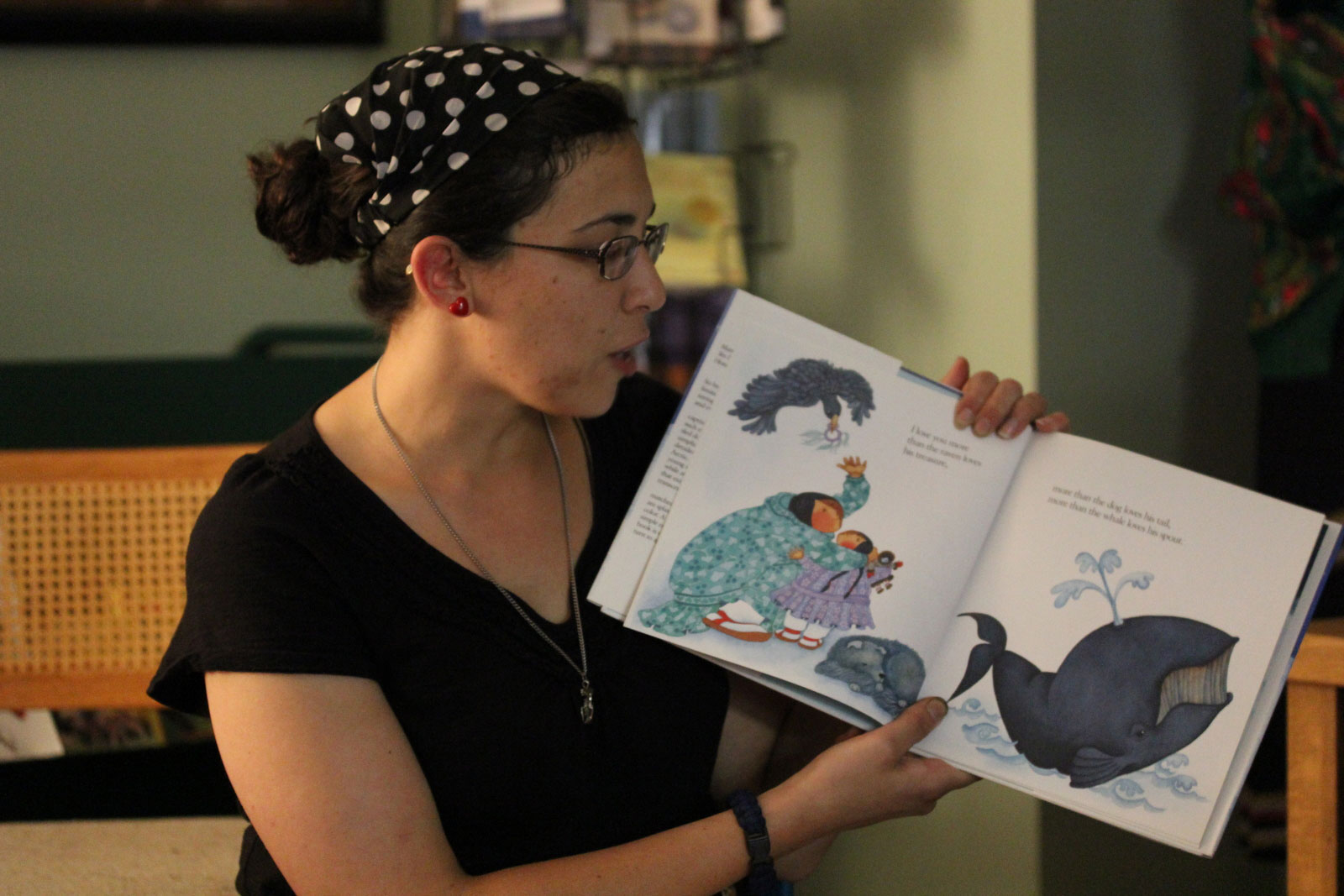 Story Time is put on by the Wah-Zha-Zhi Cultural center with the stories being read by Kathleen Auschwitz the centers librarian.

Auschwitz has been a librarian in a couple of libraries in Colorado before landing in Pawhuska Okla. The libraries she has previously worked at held a regular story time and by witnessing the children’s enjoyment of story time Auschwitz brought the idea to the Cultural center for the summer.

“ The kids really enjoy it, they will continue coming “ Vanessa Rouse mom of twins Vivian and Victoria said.

Auschwitz has crafted a campfire for the children to sit around so they have that campfire story telling atmosphere with the lights turned low. The kids can hear the fire crackle from her recording of a popping and crackling fire. The campfire is made of logs that have been burned and painted to make it look authentic and a fan with fire colored tissue paper attached to it so the fire moves and a battery operated candle to make it glow. The children loved the fire during the reading.

“When it comes to purchasing books, I strive to select books that are authentic and cultural. I pick a book that will engage a group of little children.

, I have the kids cheer along with the animals as Turtle and beaver race across the pond. “ Auschwitz said.

The crafts are based on the books they help the kids interact with the story they just heard. Crafts are done after the story is talked about and asked how they liked the story or if they learned anything.

“ It taught me how to run really fast in races, I liked it and it taught me about finding new friends and sharing” Vivian Rouse- five year old said

The goal of story time is to let the children walk away with at least a good moral such as sharing or being polite. The crafts made are for reminders of the stories.

Auschwitz hopes that they take an interest in the culture too. The groups have been young and she finds stories that wont overwhelm them.

Vivian and Victoria Rouse and Dominic Shackleford are regular listeners to Story time. The turnout for story time hasn’t been very large but Auschwitz hopes story time will grow in time.

“It has actually been a great experience to see what works and what doesn’t work so when I have larger groups, I’ll be ready” Auschwitz said.

The long-term goal for story time is to get some Osage men in to tell stories that are not necessarily from a bookshelf. It is their mission to share Osage culture and this is one way of carrying out that mission.

Story time is held on Tuesdays at 1pm. The month of August their will be no story time due to everyone getting ready for school to start. Story time will resume after Labor Day.

“I love story time for Dominic it gets him out of the house and he is able to be around other kids, I wish the tribe had other enrichment activities for the younger kids like art or music as well” Amy Shackleford said.

“The kids really love the stories especially when they can shout and clap and love the crafts they are all smiles through the whole time.” Auschwitz said.

Auschwitz is from Colorado and moved to Osage County three years ago when she met her husband who is a schoolteacher in Hominy.