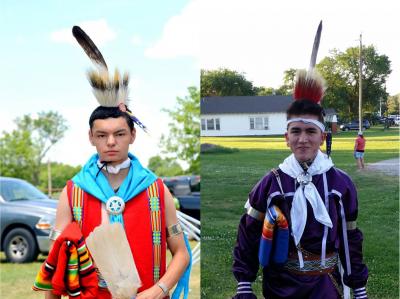 Marvin Lee Clark III and Gabriel Jerome Pelayo were among 400 upcoming high school seniors to attend this year’s class of Oklahoma Boys State, hosted by the American Legion May 24-31.The program, in its 28th year, is conducted on the Northeastern Oklahoma A&M College campus in Miami, Okla.

Boys State is a weeklong program that gives boys the opportunity to understand local and state government, run for office, learn how to form democracies for mock cities and formulate laws and policies for their cities. At the end of the program, each boy earns three college credit hours that can be used at NEO or any other transferrable college. Notable alumni of Boys State are President Bill Clinton, Michael Jordan, Neil Armstrong, Mark Walberg and Tom Brokaw.

“I enjoyed attending Oklahoma Boys State. I learned a lot more about the state and federal governments,” Pelayo said. “They taught us a lot about patriotism and gave me a better appreciation of military service. I had fun and met a lot of interesting people.”

Pelayo attends Skiatook High School and is enrolled in college courses at Tulsa Community College and will begin concurrent enrollment his upcoming senior year. He also participated in the Close Up program in Washington, D.C., with the Osage Nation Education Department in March 2014. He currently holds a 3.43 grade point average and plans to enroll in an engineering program when he attends college. Pelayo plays soccer and has taught himself how to play the drums and guitar.

Clark attends Wynona High School and will be a senior in the fall. He was vice president of the Student Council and was vice president of his junior class. He is part of the Academic Bowl team, Distributive Education Clubs of America (DECA) and Boy Scouts. He plays baseball, runs track and plays basketball for Wynona. He is the Lead Alter Server at the Immaculate Conception Catholic Church in Pawhuska and works at Weigants Pharmacy during the summer and after school.

“Boys State was fun and life altering, I learned a lot and met a lot of new friends,” Clark said. “It was a blast. I would encourage others to go to Boys State.”

Students must have completed their junior year in high school, be nominated by their school counselor, and demonstrate leadership, character, scholarship, loyalty and service to their high school, according to the Boys State website.

Clark and Pelayo, who are also cousins, were both nominated to attend Boys State by American Legion Post 198 from Pawhuska.

Clark was delegated into the Sooner party at Boys State and helped form a government for a mock city. Pelayo was a participant in the Moore city where he played the snare drum for the Oklahoma Boys State Band. He also participated in the talent show with the drum line.

Clark participates in the June In-Lon-Schka dances and is the son of the late M.L. Clark III who was Drumkeeper for the Zon-Zo-Li’n District. He is grandson of John and Jerri Jean Branstetter, Osage News Editorial Board chairwoman and former Osage Congressional Speaker, and the late Marvin Lee Clark.

Pelayo is also from the Hominy District and a Zon-Zo-Li Waterboy. He is the son of Osage Congresswoman Angela Marie Pratt and Jesse Pelayo, who are both veterans of the United States Army. He is the grandson of Patricia Barnes Pratt and Dr. Michael Pratt.