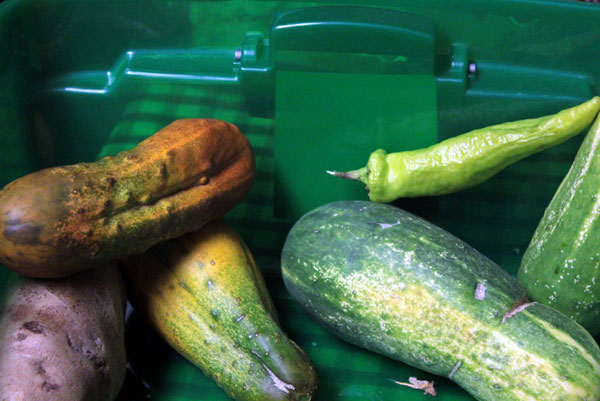 Osage Nation TA-WA AmeriCorps staff members have been busy this summer working in three different gardens around Pawhuska. The goal of the gardens is to promote healthy eating habits by eating fresh garden produce and to help with obesity and overall good health in Osage County.

“I really enjoy working on the community gardens with the other members of AmeriCorps,” said Katelyn Rulo, an AmeriCorps employee.

The Americorps office is within the Osage Nation Communities of Excellence, located on Kihekah Avenue in Pawhuska. Behind their office is an alley where they’ve planted an alley garden. It’s an experimental garden to see what works and what doen’t work in the summer time, Rulo said.

The garden is planted in red barrels that were donated to the program. The alley gardens produce corn, watermelon, cantaloupe, tomatoes, okra and peppers, along with sunflowers. This garden hasn’t produced as much as the staff had hoped since alley cats keep eating the produce.

However, despite the cats, AmeriCorps staff was able to can one jar of peppers and cucumbers. They hope to get the garden functioning for next year to sell at the local farmers market.

Bighorse asked if the AmeriCorps staff would help get the heirloom garden up and running at the WCC. The garden has what Bighorse calls the ‘three sisters’ planted in it: Corn, beans and squash.

“My goal for the heirloom garden is to create a heirloom seed bank from the planted crops and to eventually have enough to be able to pass out heirloom seeds to our fellow Osage members,” Bighose said. “We have some watermelon seeds that date back to the 1800’s.”

The community gardens, another project the TA-WA Americorps staff is involved in, is located on 1st and Prudom road at the old rail yard in Pawhuska. The garden is cut into three sections, with two sections belonging to the community. The remaining section will be for the Americorps staff.

Approximately 70 plots will be made available to the community to give them a chance to work their own garden and grow fresh produce, Rulo said. The community garden will have some rules and community gardeners will have to sign a contract with AmeriCorps saying they will maintain their plots and will not use raised beds and will not use fencing. Failure to care for the plot will result in the plot returning to the AmeriCorps staff.

AmeriCorps has planted more than 200 pumpkin seeds so they will have a pumpkin patch for the fall. Depending on how the pumpkins grow it is unclear as of now how one can obtain a pumpkin from the patch that is still being negotiated.