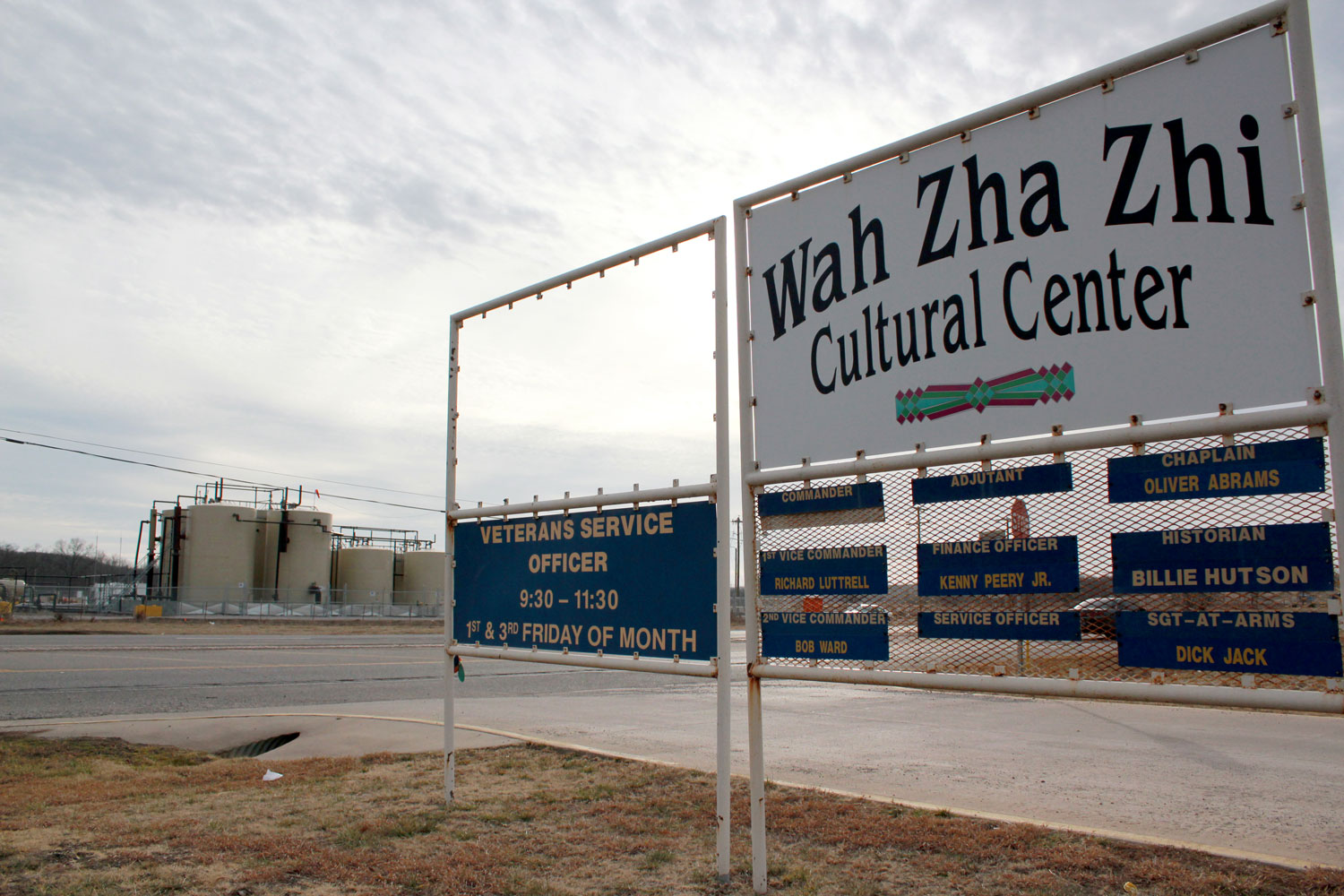 Surrounded by more than 80 landowners at the Wah-Zha-Zhi Cultural Center, the committee listened as story after story of environmental hazards caused by oil companies on their lands endangered cattle, wildlife, and loved ones.

The repeating theme after every comment: the BIA is not enforcing drilling regulations.

For decades landowners allege that they have had little to no recourse when an oil company comes on their land and violates the Code of Federal Regulations. The CFRs govern all activity, including oil and natural gas drilling, on the Osage Minerals Estate and the minerals estate makes up the subsurface of Osage County. The BIA processes and issues drilling permits for oil producers drilling in Osage County.

At the meeting Jan. 25, landowners were given three minutes to make comments the NRC would consider for their CFR updates. Stories of dead animals found, toxic gases and chemicals hurting family members, unlined saltwater pits, oil companies declaring bankruptcy and leaving all their equipment on properties for years, unauthorized service roads built, unauthorized use of private roads, fences torn down, field clearings larger than contracted for, damage to various wildlife habitats, and much, much more.

“Those sites have not worked for over 15 years, along with numerous plastic poly pipe and steel pipe lines exposed across our property,” he said. “This amount of oilfield activity is very disruptive and creates a very displeasing view to say the least.”

He purchased the property knowing the Osage Nation owned the minerals estate but the oilfield activity has significantly increased since they bought the property. Three new wells have been drilled, extra tanks have been placed in tank battery sites and one new saltwater well location has been installed on their property, he said.

Hendricks said in 2007 the CEJA Corporation had a “work over rig” on his property and while there disrupted turkey season after being there for three weeks, when they promised him they would be there for only one, dug a large pit and circulated fluids into the pit for several days.

“This pit was unlined and I felt like it was an environmental issue that should be addressed,” he said. “I notified the BIA and again was left with no satisfaction or changes in the way CEJA was operating the site.”

In October of 2007, CEJA came back to drill a well on the property and told Hendricks the site was already marked. He immediately contacted CEJA to begin negotiations on the well site since the proposed mark was in a long-term wildlife conservation easement program and was adjacent to a riparian area, an area of land between a river or stream, and an active turkey roost site, he said.

“We had a meeting with the BIA superintendent (Melissa Currey) and CEJA to negotiate directional drilling possibilities but the BIA decided horizontal drilling was cost prohibitive,” he said. “I pleaded our concerns at this meeting which resulted in no changes in the planned activity. This well was drilled and completed, before any damage settlements were decided.

“I believe this process was mishandled by the BIA. I spent the next several months talking with an attorney and finally settling on damages and an agreement from CEJA for future oil field operation guidelines for our property.”

For the next three years CEJA would be back, drilling more wells and in one instance marked the wrong site but didn’t realize it before clearing a large location, which now has erosion problems, he said. Hendricks repeatedly complained to the BIA and went through their arbitration process but he said it was a joke.

“Today, I am asking the BIA to make significant changes to CFR 226 to improve landowner relations, protect our environment and to promote fair surface damage agreement settlement rates that reflect at a minimum the regional average,” he said. He listed more changes he would like to see made to the CFRs and gave documents to the NRC, as did many of the landowners in attendance of the Jan. 25 meeting.

The Bigheart Times reported that an Osage County Judge issued a restraining order against Chaparral Energy Jan. 17, prohibiting them from drilling horizontal and disposal wells near Skiatook Lake because of sloppy administration by the Osage Agency. Chaparral says the court pleadings will cost it at least $34,285 a day it must pay its drilling contractors for idle time.

According to the article, Judge Gambill said the BIA’s casual, telephonic approval of drilling extensions and other permits without leaving a paper trail, habits that leave surface owners with no outlet to appeal is unacceptable. He said the Osage Agency is escaping review and they have to follow the rules like everyone else and if they can’t he will restrain them.

According to Channel 8, a 73-year-old man was arrested Jan. 26 after he allegedly shot the ground when an oil producer tried to come on his land to drill before the contract was complete.

In the article the oil producer was quoted as saying, “All the minerals in Osage County are owned by the Osage tribe, and it’s all managed by the Bureau of Indian Affairs, and those rights really are superior to the rights at the surface cause the tribe wants you to drill wells, and uh, according to all the regulations with the tribe, we did everything that we were supposed to do.”

Joe Serber, Osage County Health Co., used his three-minute comment period at the Jan. 25 NRC meeting to plead for everyone to work together.

“Once this ends, the negotiated rulemaking process, you (BIA) need to keep an avenue open for comments and suggestions so the issue will always be worked on and improved,” Serber said. “We will be living with the solution and decisions you all (BIA) make. Everyone wants this to be successful. There is a lot of fear, anger … but change needs to be done in a manner where everyone is a part of the process.”

Osage Minerals Council Chairman, Galen Crum, who is also a member of the NRC, said the council is meeting with oil producers and landowners and is working with both groups for the CFR updates.

“From the Osage side we will try to keep you (landowners) included because we want you involved,” he said.

“Mike (BIA Director Mike Black), I’m not picking on you but these people are hurting. All the gas, oil fields … are we going to start taking some action of any kind?” Whitehorn said. “We got some major problems out in these oil fields … we can’t just sweep it under the rug – that’s been going on for 50 years.”

Bureau of Indian Affairs Director Mike Black was at the meeting with about 10 of his staff. He was brief in his comments and said that the issues need to be addressed within the BIA and not just the surface owners.

“We need to focus on how we enforce regulations within the BIA,” he said. “We’re looking forward to examining the comments made and the written comments to come.”

When the Osage News seeked comment from the BIA they were told all questions and answers had to be approved through the BIA Public Information Officer Nedra Darling.

The next NRC meeting is set for Feb. 25 – 27 at the Wah-Zha-Zhi Cultural Center in Pawhuska. The NRC’s proposed drafts and changes to the CFRs will be posted online at www.bia.gov/osageregneg before the February meeting.