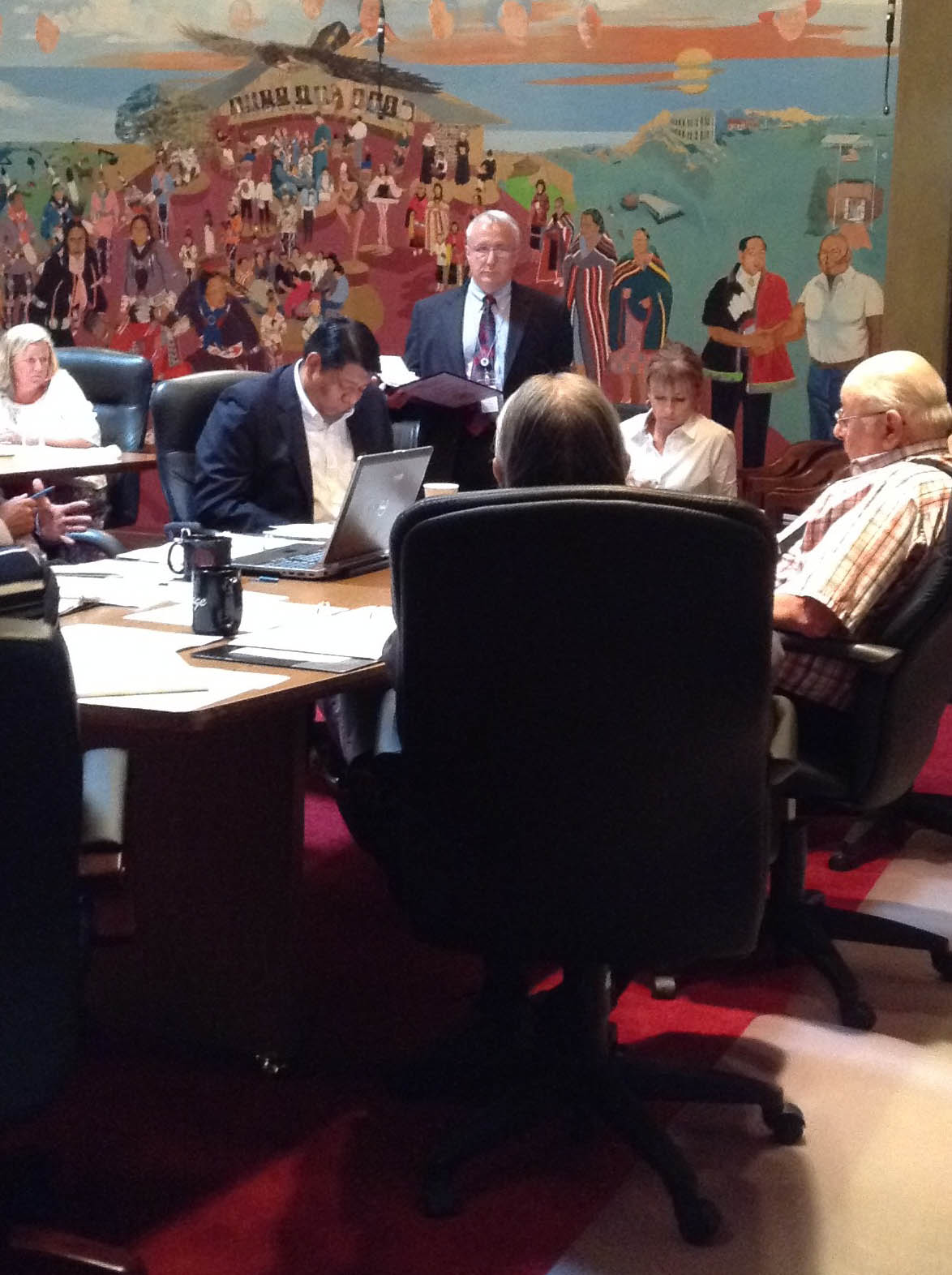 The two-day session occurred one month ahead of the 2014 Tzi-Zho Session to consider some budget matters and law amendments needed ahead of the 24-day regular session starting Sept. 2.

All bills considered by the Congressional body were fasttracked for floor votes once considered for action and any amendments in their committees of jurisdiction.

Congress passed the following three bills on July 31 during Day One of the session:

- ONCA 14-49 (sponsored by Congressman William "Kugee" Supernaw) amends the Nation's Restricted Real Property Repurchasing Act which identifies other prospective land types for purchase by the Nation and adds a definition for "perennial streams."

The revised act also amends the limitations on using restricted real property repurchasing funds to include those lands or fractionated interests advertised by the Bureau of Indian Affairs at or below 105 percent of appraised value. The bill passed with an 11-0 vote and one absence by Congressman John Jech on July 31.

- ONCA 14-50 (Supernaw) gives a $75,000 supplemental appropriation to the ON Attorney General's office for an increase in the entity's professional fees line item.

During the Congressional governmental operations committee meeting held to consider the bill, officials said the additional money will be used for a contract to hire Tulsa-based law firm Barber and Bartz to study the idea of restructuring the Nation's enterprise/ commerce boards into one "superboard" similar to the business/ enterprise board structure currently used by the Cherokee Nation. The bill passed 9-2 with "no" votes from Congress members Ron Shaw and Shannon Edwards.

- ONCA 14- 54 (Archie Mason) requests a 2014 fiscal year budget modification to the Nation's Division of Administrative Services to reduce the appropriation for the Nation's Tribal Works Department by $18,809. Assistant Principal Chief Raymond Red Corn said during the previous chief's administration, "the person responsible for establishing the amount of square footage on which the space costs is based made a significant error of $185,000 worth of space and as we approach the end of the (fiscal) year, (the accounting department) realized this and brought it to our attention."

On Day Two, with nine "yes" votes, those bills passed by Congress on Aug. 1 are:

- ONCA 14-53 (Mason) is a $22,677 supplemental appropriation bill to the Osage News to cover the newspaper's additional professional fee costs associated with mailing the newspaper and to build the newly launched newspaper website at www.osagenews.org.

The newspaper budget shifted unused finding in its FY 2014 budget to cover the shortfall created by increases in mail and distribution costs and new website costs to lessen the supplemental appropriation request.

- ONCA 14-48 (Congressman Ron Shaw) is an appropriation bill for the Nation's Health and Wellness Division in the amount of $300,000 for the Communities of Excellence Programs #568 M-Power (NATEN), and #565 Tobacco Control for the 2015 fiscal year.

The two Communities of Excellence programs are each receiving Oklahoma state grant funding in the amounts of $150,000 each. The department focuses on issues causing chronic disease through educating the public on healthy food choices, exercise and smoking cessation.

- ONCA 14-52 (Congressional Speaker Maria Whitehorn) is an appropriation bill for $280,000 that will be used to pay monthly loan payments for the campus master plan for the final three months of the 2014 fiscal year.

Red Corn said the Nation will be responsible for approximately $90,500 in monthly payments plus interest for the bank loan capped at $10 million.

- ONCA 14-41 (Congressman James Norris) is an amendment to the Nation's open records act seeking to protect the mail and email addresses of Osage Nation members who participate in surveys conducted by ON government entities.

During a Congressional governmental operations committee meeting on the bill, Red Corn said the proposed amendment is an effort to protect the privacy of Osages who participate in future surveys. The Executive Branch asked Norris to sponsor the amendment as it prepares to issue online surveys to Osages who elect to participate in them by providing their emails to the Executive Branch.

Red Corn also said when the surveys are completed, the aggregate results will be public information, but the individual email addresses of those who participate will be protected under this amendment. An advertisement asking for Osages to participate in the forthcoming surveys appears in the August edition of the Osage News.

Absent during the afternoon Aug. 1 special session were Congress members Archie Mason, John Jech and Angela Pratt. All passed bills were sent to Principal Chief Geoffrey Standing Bear's office where he signed them into law.