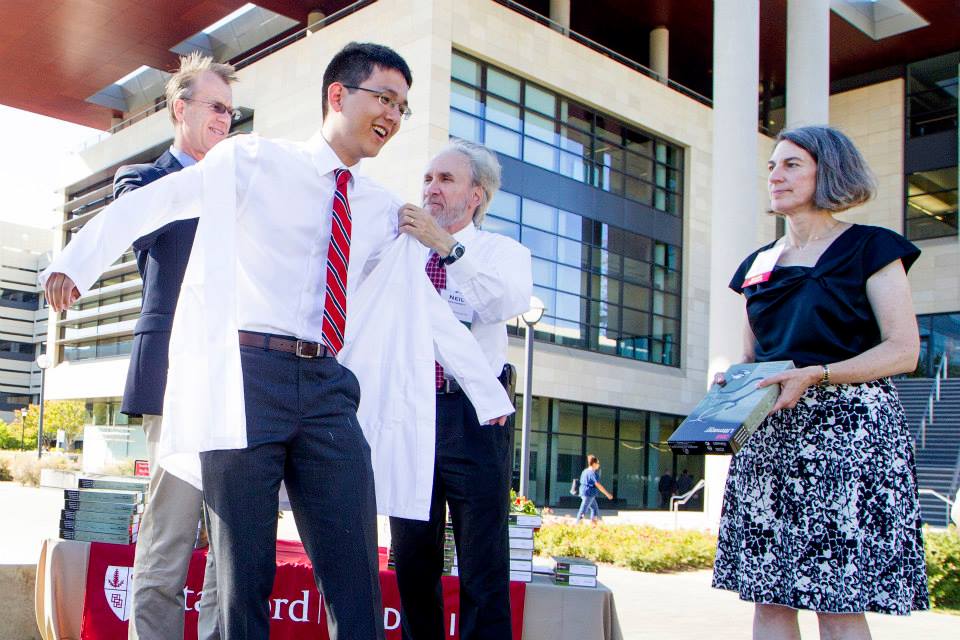 Among Stanford University’s first-year medical students is Osage tribal member Layton Lamsam. He joins 90 in his class selected from an applicant pool of 7,450 students from all over the world – he’s the lone Native American.

Lamsam, who just graduated with his bachelor’s degree in Biology from Stanford in June, was also accepted to eight other medical schools. They included Harvard, Yale, Johns Hopkins, Columbia, Cornell, Washington University, University of Nebraska Medical Center and the University of Oklahoma. His top three schools were Stanford, Harvard and Yale.

“I stayed at Stanford because of its culture. I knew that life was laid back, people were friendly, and school was less stressful than anywhere else,” Lamsam said. “Also, the communities that I found in the Native and Christian students at Stanford was a support network that I did not want to give up.”

The 22-year-old Osage, whose family is from the Grayhorse District, took part in Stanford Medicine’s White Coat and Stethoscope ceremony on Aug. 22. Attending the ceremony was his mother, Teresa Trumbly Lamsam, his grandparents Joe and Arlena Trumbly, and his uncle Floyd Shaw.

“The ceremony was a joyful experience and we were blessed to be there for him. I attended the parent orientation right before the white coat ceremony so my pride was tempered with the reality of how difficult this journey can be,” his mother said. “During the white coat ceremony, I just kept thinking ‘It takes a village ... but how are we going to get the village here!’ But I also remembered that Layton’s faith as well as family and community support have taken him this far. Layton feels as though he is working in God’s plan for his life and that is encouraging for me.”

The white coat ceremony included a week of new student activities, which began with a camping trip to Lake Alpine in the Sierra Nevada Mountains, followed by three days of orientation.

At the ceremony, Lloyd Minor, MD, dean of the medical school, addressed the students and their families at the ceremony. He said the next four years, and for some students sometimes longer, will change the way they look at the world, according to a Stanford Medicine release. “You will learn some of life’s most valuable lessons from your patients.”

Lamsam tries to make it back for the In-Lon-Schka dances every year but his schooling sometimes prevents him from returning. In May he served as Head Man dancer for the Osage Tribal Princess Sorority honor dance in Pawhuska and said the time back home was the rest he needed.

“Being back around my community was just what the doctor ordered. In college, my summers and breaks usually had to do with applications or lab work,” Lamsam said. “Catching up with folks and going to events has broken the isolation and recharged me. I’ll have to find a way to be back more often in medical school.”

Lamsam’s focus is in helping Indian Country. He got his start in the Four Directions summer program where he learned about Indian health from a research perspective, he said. He took a class at Stanford on Native health and shadowed doctors at an IHS hospital on the Rosebud Reservation in South Dakota during spring break. He went through the program twice and taught the class at Stanford his senior year. He also learned statistical programming and health policy modeling which led him to doing cost-effective analysis of the IHS’ Diabetes Prevention Program and one day he hopes to get access to the IHS database to validate his results with official data, he said.

As an undergrad he was a Udall Scholar in 2013, he co-chaired the Stanford Powwow in 2012, established the Indigenous Health Week speaker series at Stanford, and was the president of Stanford’s Natives in Medicine.

“For my clinical specialization, I will not know what I like until I start rotating in the hospital, though I am interested in surgery. My research focus in medical school will probably be population health and health care management. I have met the leadership of some of the top hospitals in the country, but I did not realize how important health care management was until I met the CEO of a small IHS clinic in Kyle, South Dakota,” Lamsam said. “In short, it was the most impressive clinic I have ever seen – and that goes for everywhere, not just IHS facilities. Develop a vision, get providers on board with your goals, and use a lot of statistics. That makes a bigger difference than a new cure or better technology.”