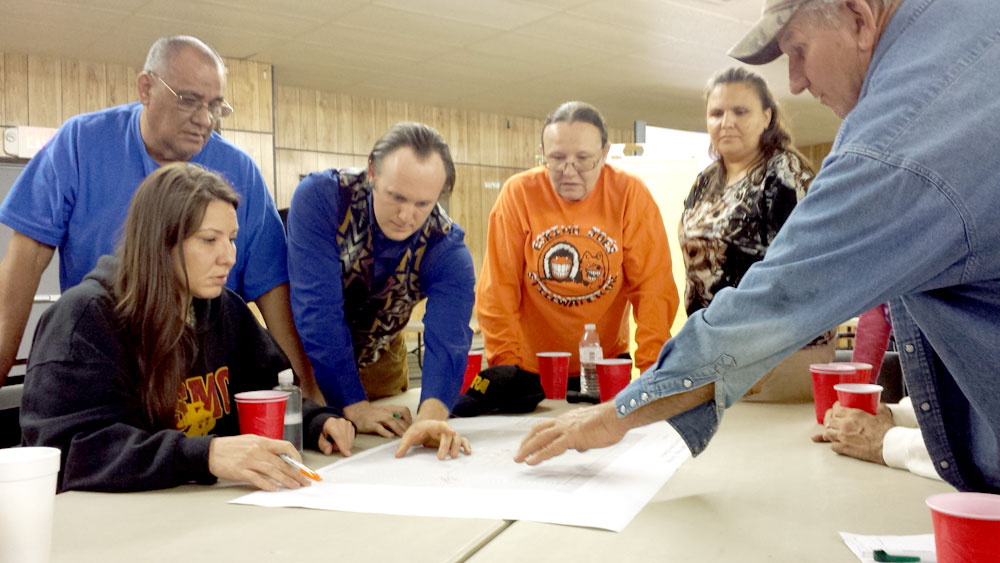 Master plan for Pawhuska Indian Village in the works

Efforts are underway to create a master plan for the Pawhuska Indian Village thanks to input gathered by a Native American-owned consulting firm who met with village residents in November.

On Nov. 10, the Pawhuska village Five-Man Board hosted a resident meeting in the Wakon Iron Community Building where the 60-plus village households were encouraged to meet with planning/ architectural design firm Blue Star Studio.

Blue Star Studio, which has an office in the Pawhuska Business Development Center immediately west of the village, is working with the Five-Man Board on the village master plan. One of the first steps includes gathering input from the village residents, which was the purpose of the Nov. 10 meeting.

Blue Star CEO Jon Red Corn, co-founder and principal architect Scott Moore and their associates interacted with the village residents asking what they would like to see occur or be built in the village. The attending residents broke into groups where they held brainstorming sessions to answer the questions.

For example, the groups stated Osage culture is very important to the village community with the annual In-Lon-Schka ceremonial dances as an example. Other community values include youth, elders, education and families. Several residents stated the In-Lon-Schka is important because it’s an event that many Osages attend for cultural obligations and to stay connected to home.

Other items hitting the wishlist during the meeting include: removal of dilapidated structures, using solar/ wind as alternative energy sources, creating/ maintaining a community garden, upgrading the sewage system, building a children’s playground, building a new office for the Five-Man Board, as well as a recreation center.

During the meeting, Red Corn said the input gathered at the meeting will be used to develop the village master plan, which includes writing common goals and a vision for the community. He said a future meeting will be likely after the information is processed by Blue Star.